Order on Bandcamp,
Stream on Spotify
or to order

The soundtrack for Dutch/Belgium/Italian co–production Porselein (Porcelain), a psychological drama by Jenneke Boeijink.
Besides the music that ended up in the film, this album contains 12 extra tracks that didn't make the cut, but are still worth hearing.

Rutger Zuydervelt (who mostly works under his pseudonym Machinefabriek) regularly works for film, though mostly for documentaries. Porcelain is his second feature film score, after the Canadian mystery drama The Cold And the Quiet.

A common modus operandi for Zuydervelt is to collaborate with instrumentalists by using recordings of their improvisations and sculpt them into new pieces. This way of working was used for Porcelain as well, with the amazing Italian cellist Francesco Guerri adding his magic to this score.

Another important presence on the album is (a sample from) Henry Purcell’s The Fairy Queen, which functions as a ‘leitmotif’ throughout the film. The piece had a big influence on director Boeijink while she was writing the movie, and it blends perfectly with Zuydervelt electronics and Guerri’s cello. The understated, brooding drama enhances the tone of the movie perfectly.

The lives of Anna, Paul and their young son Thomas look perfect – from the outside. Paul has a well-paid, demanding career, Anna has a studio at home where she works with porcelain and Thomas is a angelic child. They have money, friends and each other. But when Thomas bites one of his friends at school, the first cracks appear in the glossy exterior of this 'perfect' life.

It marks the start of a long, frustrating search for the cause of their son's aggression: a process that mercilessly exposes the frailties they each carefully hide and prompts the parents to take desperate measures – even calling in the help of an almost complete stranger.

Rutger Zuydervelt has recently self-released his score to the Dutch/Belgian/Italian coproduction of Porselein (Porcelain), a psychological drama by Jenneke Boeijink. It also features an extra 12 tracks which, although not making the final cut, were still instrumental to the score’s overall composition.

“The lives of Anna, Paul and their young son Thomas look perfect – from the outside. Paul has a well-paid, demanding career, Anna has a studio at home where she works with porcelain and Thomas is an angelic child. They have money, friends, and each other. But when Thomas bites one of his friends at school, the first cracks appear in the glossy exterior of this ‘perfect’ life. It marks the start of a long, frustrating search for the cause of their son’s aggression: a process that mercilessly exposes the frailties they each carefully hide.”

There isn’t such a thing as a ‘perfect life’, and the score reflects this. Nothing is as it seems, at least when viewed from the outside. This is a normal family, living in Rotterdam, but their everyday lives conceal a multitude of cracks. Nothing is perfect, and the score is an immediately tense one, reminding the listener that stability and control are illusions, possibly designed by the self for comfort and reassurance in a Universe where chaos and order collide and coexist. Happiness and wellbeing – a stable life – is easily breakable. One is never in complete control, and the cracks soon begin to shudder through the music and through the film.

With contributions over multiple tracks from renowned cellist Francesco Guerri (Carla Bozulich, Jessica Moss), the music alternates between violent interludes and tender moments. Working through the emotions, and going through them to get to the other side (the only way through), the parents never give up on their son, and neither does the music. It has to push through, and it has to confront the uneasy questions to get to the true, and sometimes painful, answers. But the music, like the process, is restorative. The parents care – and this is reflected in the intimate and heart-wrenching pull of the cello’s strings, as if holding their son closer and tighter to their chests, never letting them go.

A loss of innocence taints the score, which is reflected in Thomas and his act of aggression, but there’s also uncertainty and confusion and pain. There’s a sense that one can never go back, and that’s bittersweet. The angelic choir that ghosts in and out on ‘Last Goodbye’ has a childlike, peaceful innocence, but it’s tinged with sadness and finality. This is a masterful soundtrack, and it shows a great maturity from a prolific artist. One might expect this, but it’s still a striking score. Zuydervelt has been around the block for a while, but this score elevates his musicianship to that of an adept composer and not just an artist.

Life is fragile, like porcelain. Hold it in your hands, and be careful with it; make sure it doesn’t break or crack. Porselein will be screened in Dutch cinemas from March 12.

I honestly believe it’s not just a transitory fashion, nor a simple escape from the commonplace: if composers of atmospheric music are increasingly involved in film and television productions it is because their aesthetics digs much deeper than it seems; it doesn’t just underline the emotional elements of the staging, but often reveals inevident feelings, suggests those implicit upsides that we can distinctly perceive in our interpersonal relationships even if we aren’t able to give them a name.

That is certainly the case with the twenty-two short sequences created by Rutger Zuydervelt (aka Machinefabriek) for Jenneke Boeijink’s psychological drama “Porcelain” (2020). Its main theme is one that recurs with particular frequency in recent independent cinema: the deceptive aura of perfection of the first world, of the “ideal” family that seems to enjoy all sorts of ease and individual realization, until a first unexpected crack traverses the precious vase of their apparent stability. When the only child Thomas bites a classmate at school, suddenly every choice, every teaching comes into question: as in “Miss Violence” (Alexandros Avranas, 2013) the shadow of evil broods in the glacial silence of a bourgeoisie unsuspecting of their educational and sentimental deviances.

Although only ten fragments – barely a quarter of an hour in length – were included in the final cut, it is essential to go through the whole soundtrack to find out how deep Zuydervelt went into the sound “radiography” of the story, giving rise to its uncovered nerves while also letting glimmers of piety and redemption shine through. Filtered voices of sacred choirs thus intersperse the restless nocturnes and the most oppressive drones, multiple opportunities to exploit with admirable balance the wide expressive range of Francesco Guerri’s cello, from the most ethereal melodic textures to the unstable line of a seismograph announcing the catastrophe.

Works such as Porcelain underline the inadequacy and abuse of the term ‘ambient’, applied indiscriminately also to what is now configured as an authentic “emotional writing”, the primary outpost of the new music for the screen.

Rutger Zuydervelt, for instance, has quite a few soundtracks in his discography. For video, dance or installations, either under his Machinefabriek alias (for the more experimental/electronic/electroacoustic work) or under his own name (for the more ‘composed’ works). The video for Dauw, for instance, is nine years old now, but still as heartbreaking as on its first release. More recently, he created the arctic soundscapes for Esther Kokmeijers Stillness I and II.

The soundtrack for Porcelain (his second movie soundtrack), however, feels like a new chapter in Zuydervelt’s impressive oeuvre. Because it mixes Zuydervelt’s abstract electronics with more ‘post-classical’ compositions performed by Francesco Guerri on cello. More dramatic highlights come from the incorporation of (choir) samples from Henry Purcell’s The Fairy Queen. Overall, this is a perfect soundtrack for a movie depicting the falling apart of a seemingly happy family. A brooding atmosphere, with an ominous undertone even in the seemingly comforting arrangements. It ‘works’ well, even without having seen the movie.

Contrary to a lot of Zuydervelt’s music, the pieces here are all relatively short: Last Goodbye being by far the longest with its 3’49”. Most of the other tracks only need around 1 to 2 minutes to set the mood. The ‘mood sketches’ used in the movie are merely 15 minutes in total, but for this album, Zuydervelt added another 20 minutes of (12) outtakes.

Movie scores or soundtracks can be appreciated in different ways, depending on whether you’ve seen the movie or not. If you have, it’s a memory that you’ll probably appreciate as much as you appreciated the movie. If you haven’t, it’s important that the music has enough power to speak for itself – without the context of the story it was written for. I haven’t seen Porcelain (yet), but it’s on my watchlist now, simply based on this beautiful score.

'Porcelain' is released as Rutger Zuydervelt and not as Machinefabriek, maybe as a step towards recognition as a film composer. 'Porcelain' is a movie by Jenneke Boeijink and is about a young boy wh0 is aggressive and his parents' search for the cause of that and the desperate measures they take. I haven't seen the film. This is the second time Zuydervelt works on a feature film score (he worked on other film projects too) and for this, he called in the help of Francesco Guerri, the Italian cellist to provide some of his improvising, which Zuydervelt uses in the overall score. There is also a sample of Henry Purcell's 'The Fairy Queen' used, which was inspired by Boeijink. This too is a short record, thirty-four minutes, and has twenty-two pieces of music. Ten are used in the movie and the other twelve are outtakes. I recommend playing the trailer so you get a sense of the drama and see how the musical work within the movie. I am not sure if they all work in the same way as standalone pieces, which, I guess, is the problem with albums like this. The music is throughout very short here and you can easily imagine how they work within the context of a film and also how the short pieces would work in a larger time frame, say, as stand-alone pieces of music. The pieces are eerily beautiful and with the occasional cello by Guerri coming in, there is a great sense of darkness in these pieces. All of which is somehow way too short for my taste. I have no idea how the world of film scoring works and if one is allowed to rework short bits into longer ones for the OST album, but I would have loved to hear that. A bit like the final piece, 'Last Goodbye', which lasts close to four minutes and by far the longest piece on this CD. As it is, this is certainly a great album. 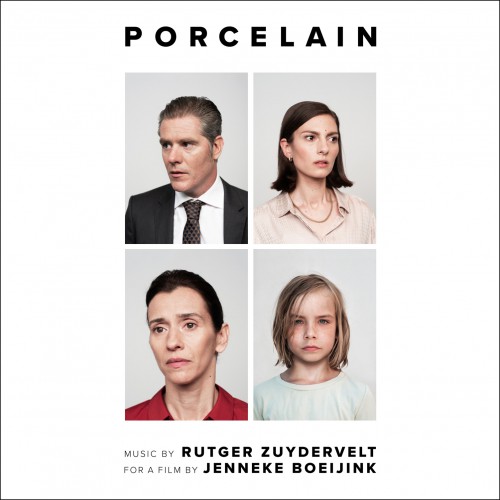