Including tracks by Hydra Ensemble and FEAN, as well as 'Blue, Celeste, Turquoise', a video work by Esther Kokmeijer, with soundtrack by yours truly.


Matter Affect is a copious compilation with work by all artists, performers and collaboration partners who have been confronted with COVID restrictions in the program of De Perifeer in recent years; shows that have been cancelled, moved (several times), took place in an adapted form or could not even be booked anymore.

De Perifeer asked everyone involved to reflect on this strange time period in their very own way. Allowing almost every conceivable shape or form; in audio, text, image or combinations thereof. The list of participants is surprisingly long, especially for a small venue like De Perifeer. But at the same time the relatively manageable scale of De Perifeer makes it possible to make an elaborate compilation like this, in which the personal impact of COVID is clearly felt and there's room to show what is hidden behind numbers and graphs.

All submitted material is collected in an A4 box in an edition of 250. Matter Affect consists of substantively different entries from almost every conceivable art discipline. The whole thing is accompanied by a contextual booklet; basically a concise overview of events.

And then we'd almost forget that Matter Affect is also a very special release for another reason entirely; it’s the 100th release on the Esc.rec. label!

The box set of Matter Affect includes:
- all previously mentioned audio tracks compiled on 3 cd's, except 'Vivarium' and 'Dance With The Devil (Gate 6)', which are only included in the download
- A4 sized contextual booklet about Matter Affect and all its contents
- text of 'Life in the village; it's difficult' and photo Plan Kruutntoone
- online project 'audible haiku for resting' and postcard by Francesco Ameglio
- quote by Zbigniew Chojnacki
- photo by Barbara Debeuckelaere, printed on a card
- A4 sized artwork 'This is a copy...' by Jeroen Diepenmaat / Hellend Vlak
- several QR-coded links to online recordings of live streams and other online material
- printed A4 sized collage by Hidde van Schie
- postcard by G aka Gerard Olthaar
- folded A3 sized offset print by Sounds Like Juggling
- A4 sized riso print 'Covidus Interuptus' by Sander op den Dries
- video 'Dead Pasta' by Beam The Bomb
- edited video recording of live performance by Kraftformer
- folded 40cm x 40cm offset print of 'What's inside the Coronium?', originally a 50cm x 50cm pen drawing by Domenique Himmelsbach de Vries
- text and photo by Kunstenlab
- A4 sized riso print by NachtExpo
- postcard with video 'Blue, Celeste, Turquoise - She has Something Sensual' by Esther Kokmeijer & Machinefabriek
- postcard and text by MIMIK
- A4 size printed score by Roland Dahinden & May Kooreman
- A4 sized book 'Parabel van de vlieg en het paard' with flexidisc single 'Wat ik deed, was niet wat jij wilde' by Peet & De Teefjes
- set of 4 printed photos by Nobuka
- complete cd album 'Valse Rust' by Ensemble Extra Ordinair
- video 'Frammento' by Salmoni with choreography and dance by Sara Saccotelli
- A4 sized riso print of 'The Winterman' by Danielle Lemaire, originally a colour pencil drawing on paper
- offset print of drawing 'Lockdown Variation 85' by Jaap Blonk

The A4 sized box that holds all of this, doubles as the shipping box for this release. 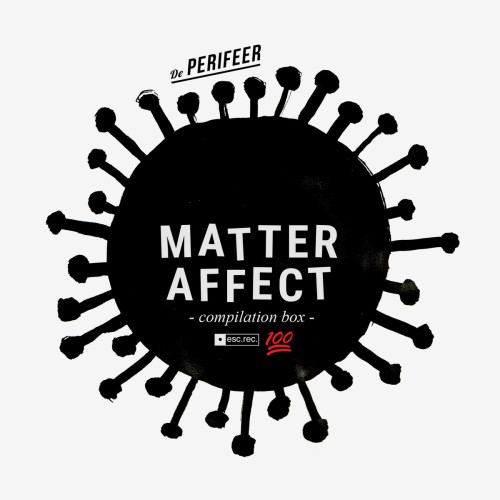