Side A. Hilary
Side B. Jeffery

A collaboration with trombone player Hilary Jeffery. Two cinematic tunes on a bright orange cassette, housed in a stamped, brown carton arigato pack. Free mp3s of the tracks will be send to you when purchasing a tape...

There are not many times you hear a record that has a trombone as its main instrument when you listen to electronic music. Machinefabriek's The Hilary Jeffery Tapes EP though has just that. This is EP is a collaboration between trombonist Hilary Jeffery and Rutger Zuydervelt, a.k.a. "Machinefabriek". The EP opens with a slow and soft passage before moving towards a drone textures that takes hold. The tenderness of the first track is repeated again in the latter, with multilayering of the horn sounds. It is refreshing to hear a subtle piece of electro-acoustic work that doesn't need to bring out the big guns, and show off the processing power of the given machine.

If Duotoon is his most stark work then his most recent release The Hilary Jeffery Tape could perhaps claim the opposite accolade as arguably one of his most blatantly evocative to date. This one is a collaborative effort with British trombonist Hilary Jeffery (also of brilliant minimal psychedelic group Lysn) in which Machinefabriek manipulates and re-works two of Jeffery's recordings. Released on a limited run of 100 cassettes at the beginning of August it consists of two tracks, 'Hilary' and 'Jeffery' respectively. The former is a slice of dusty cinematic nostalgia, the wail of the trombone evoking a golden age of celluloid soundtracks adorned with faded black and white images which, when littered with Machinefabriek's subtle layers of translucent noise, brings on a mysterious sense of dread. The second track is more melodic, but still shot through with the same feeling of unease; the production lends it a vast reverberating feel, not dissimilar to the work of Richard Skelton, which conjures up images of desolate moors and strong winds on dark nights.

His music is difficult to pigeonhole and varies from the highly experimental to more approachable melodic pieces and usually involves manipulation of generated sound from a wide range of electronic and acoustic instruments.  Arguably his best works have resulted from a collaborative approach with other artists and it is just such a work, 'The Hilary Jeffery Tape' which I will look at first.

This two track single is presented in the unusual cassette format and limited to 100 copies with mp3 downloads supplied after purchase of the cassette. Rutger has collborated in this venture with the trombonist Hilary Jeffery from Amsterdam who has appeared with the Kilimanjaro Dark Jazz Orchestra and lately with Kreepa, Lysn and Sand (Planet Mu and Adnoiseam labels).

We are firmly on experimental ground here with fairly melancholic trombone playing occasionally punctuated by loud cinematic and energetic blasts that are either extremely bassy, or pitched high so that they can be manipulated down by Rutger's subtle electronic intervention.

Hilary is the more unconventional of the two tracks and we are treated to a variety of applied effects which make the trombone resonate, turn into a pulsing beat, or flatten out into more familiar drone territory. There is a wonderful airy descending drone effect towards the end of the track which terminates in a high pitched whistle and I suspect that even Hilary's own breathing in between played parts has been manipulated to become part of the music.

Jeffery opens with a piercing blast on the trombone at the start, but then turns into a gentle warble and eerie tremble accompanied by string like drones. At one point the trombone breaks out from the background drone like a liner clearing a fog bank and produces a resounding wave of bass that hits you in the stomach. This is the better track on the release for me and is a truly fluid symbiosis of trombone and electronic experimentation.

The two tracks do demand to be replayed so that you can  pick up all the nuances of sound treatment which are interwoven with the trombone playing to great effect.

A collaboration with trombonist Hilary Jeffery, this rather wonderful new Machinefabriek release finds Rutger Zuydervelt fashioning two very fresh sounding, curiously suspenseful pieces from the brassy source material. 'Hilary' opens with slow, elegantly lyrical passages before shifting drone textures take hold - something explored in greater abstract depths during 'Jeffery', which multilayers the horn sounds until the original timbral properties of the instrument are all but eroded away. More excellent electroacoustic work from the on-form Zuydervelt. 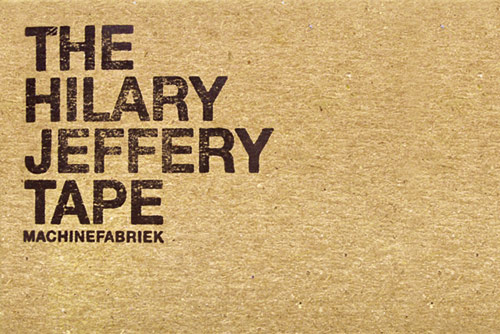 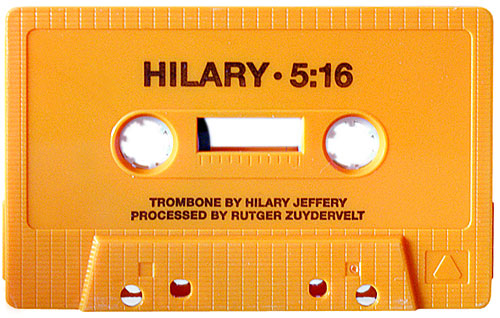