An experiment with 'no-input' mixer, effectpedals and contact mic, all cut and pasted to a 20 minute composition. Gentle buzzing, crackling static... Very minimal, very exciting (if I may say so).

SOLD OUT
> but available digitally at my bandcamp page, right here

AQUARIUS
Wow! Another cd-r from Machinefabriek, who seems to be in some sort of competition with his sometime partner in sonic crime, Jasper TX, who seem to in the throes of trying to out release each other. But that is most definitely not a complaint. We're all winners in this contest. But for those of you keeping score, it's 6 to 5 Machinefabriek, but heck, that's only counting the ones we got here.
Anyway, we're just happy to have more Machinefabriek to listen to. This 20 minute 3" bucks the usual trend of most 3" cd-r's and instead of offering up one ultra long sprawling epic, splits his 20 minutes into 11 bite size pieces, which actually suits the sounds on Hapstaart as well.
Unlike the blissy gauzy ambience of his other releases, on Hapstaart, Rutger Zuydervelt, the man who is Machinefabriek, pushes his sounds to the extreme, ending up with a disc that has more in common with Ryoji Ikeda than it does any of his drone bliss peers. The whole disc seems to be based on a massive, barely audible low end thrum, that pulses and throbs subtly over the course of the 20 minutes, sometimes dipping to near silence, other times threatening to blow the speakers. Textures and layers are ultra minimal, with the volume turned waaaaaaaay up, you can hear these little drones twist and shimmer. The record is peppered with bits of crackle, of little pops, brief exhalations of hiss, or static, crumbling sine waves, intense streaks of jagged high end, but these intrusions are typically brief, fading out as fast as they appeared, only to leave the records active ultra low-end to slither almost silently on its way.
An awesome slab of microscopic sound. Headphones recommended!

VITAL WEEKLY (FRANS DE WAARD)
Just as I thought that Machinefabriek were these days about releasing 3" with one or two long ambient tracks, he releases 'Hapstaart', twenty minutes and eleven tracks hovering on the edge of silence. 'Mixing desk, wires, effect pedals, laptop' it says on the cover, but to me it seems that especially the latter has been used to transform the sound. One has to crank up the volume quite a bit to hear the full thing. Lots of deep bass sounds, high end beeps and the occasional scattering of a contact microphone. Whatever happens outside the computer is something we don't know. To that extent goes the principles of processing here. It's indexed at eleven tracks and they indeed sound different from each other, it's more or less one work - idea wise - divided in eleven parts. Quite a nice move again.

BOOMKAT.COM
I'm starting to think that there's something funny going on at camp Machinefabriek. Rutger Zuydervelt quite evidently has a team of enslaved experimental musicians working non-stop, twenty-four hours a day coming up with hundreds upon hundreds of fizzled-out dronesome masterworks, if he doesn't then the man was obviously the result of a government experiment go wrong. Imagine if Steve Austin had been granted the special power of producing loads of great avant-garde music instead of super strength and super speed? That would make pretty boring telly admittedly but the output would no-doubt resemble that of our man Machinefabriek's. This latest 3" cd (there have been over thirty now.) shows our protagonist on a new journey, a tentative voyage into the austere land of academic minimalism! Yep Zuydervelt ditches the whirring jet-engine noise for a second to ponder the wonders of Japanese microsound, at least that's what it sounds like. 'Hapstaart' was made using a mixing desk, wires, effects pedals and a laptop but you wouldn't know to listen to it, the sounds Zuydervelt manages to extract from these the most slender of wares is simply shocking - crumbling noise one minute, tremulous bass the next, a high pitched frequency here, a distorted wave of feedback there. This might be the most academic and minimal thing that has come from the Machinefabriek camp to date but it's also one of the most detailed, most glacial and most phenomenally complex. Each sound feels like it has been engineered at the hand of a true craftsman, yet where so much minimal music seems to travel much too far up its own rear-end, Zuydervelt carefully manages to inject it with the same sort of punk spirit you'd expect to find on a Prurient record. 'Hapstaart' is a noise record done very quietly indeed, and to be quite honest it can really only be Machinefabriek. Absolutely essential and super limited - we have 50 copies and we're not getting any more, ever! 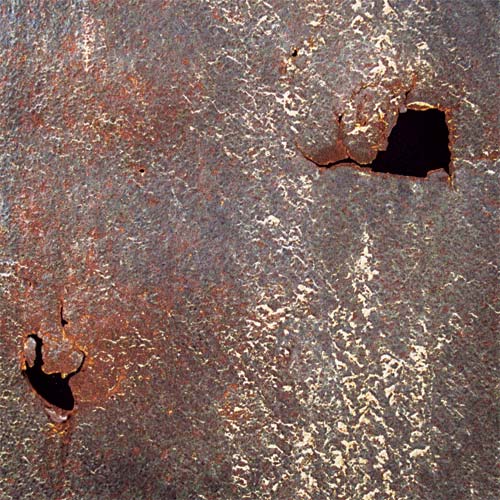