Stream and/or buy at Bandcamp,
send an with your order

In 2016 I was commissioned by Musica, to compose a piece for their sound/art festival OORtreders (in Neerpelt, Belgium), and to perform it with 50 members of a local music school. So I wrote ‘Sileen’, a piece based on three groups playing a set of swelling notes; overlapping in different combinations each time. A fairly simple score to play, but one that asks a lot of concentration from the performers (and a lot of breath for the horn players - one kid fainted during rehearsals). A recording of that performance can be found here: soundcloud.com/machinefabriek/sileen

I’ve been thinking of recording a studio version of this piece for a long time, and finally decided to do so, with the help of bass clarinetist Gareth Davis. I decided to not go for a big orchestral version like at OORtreders, but to approach it in a more intimate way, using only Gareth’s clarinet and some electronics for extra colour. The radio static and field recordings of the original were also abandoned, to make the whole thing more transparent and focused.

Compared to the busy, slightly chaotic performance in Belgium, this new version is almost intimidatingly sparse, even more so ‘cause at the last minute I decided to slow down the new version to half its speed, which gave way to more details like intriguing overlaps and beating frequencies.

The structure of the composition is very simple. There’s three groups, and each have 4 or 5 sets of repeated chords of exactly one minute - fading in and out like a wave. Each set of repetitions is followed by a silence of the same length before presenting the next set. Since the amount of repetitions is different for each group (2, 3, and 4 times), the overlap shifts and differs each time.

More then forcefully composing a beautiful piece of music, the structure of Sileen II is more about simply presenting these different, isolated combinations of tones. When all the options are heard, there’s a point where all group have a minute silence at the same time. Then the peace ends with a final (long) chord. I guess that finale is my composite touch to an otherwise automated composition.

While the original Sileen piece was written for a big group of musicians, I wanted this new version to be more compact and focused. I started with creating the piece with electronic sounds, and then ask my regular collaborator Gareth Davis to record the different notes of the piece, for me to have a library to work with, and to add a more human touch to the composition.

Originally, the piece was actually half it’s length (and an octave higher). After spending some time mixing Gareth’s bass clarinet with my electronic tones, I still wasn’t convinced. It was felt hard to actually turn this into a piece that was pleasant or intriguing enough for me to listen to. I really liked the systematic aspect of the composition, but despite the slowness of the piece, it still felt too hushed and uncomfortable. But then a too-simple-for-words idea came to the rescue. By simply slowing the piece down to 50% I suddenly felt the click. This was it. Now the chords where sustained long enough for the listener to actually engage with them, to have time to sift through the different tones, focus on the beating timbres or simply ‘float’ on tone-clusters. Lowering the pitch also gave the piece a much warmer and deeper sound. Great how such a simple intervention changes so much. The piece was finished.

'sileen II' is essentially a long (50-minute), fluctuating drone sourced from Gareth Davis' bass clarinet with sculpting and other modifications made by Zuydervelt. One of the first things I noticed is that while some aspects of the sound--its range, hollowness, etc.--are bass clarinet-y, other characteristics, like any sense of woodiness, seem to have disappeared, so I'm left with a more organ-like impression, albeit enveloped in thin, by no means overbearing wisps of electronics. The sounds appear in slow, slow pulsating waves, structures that seem simple initially but reveal many layers of depth when listened to closely (headphones recommended). Slight variations in pulse frequency, pitch and tone combinations are introduced over the piece's course. Near the beginning, the waves are fairly continuous; little by little they become more discreet, almost to the point of admitting the briefest of silences between events. There's a somewhat more pronounced than usual pitch shift around the 42-minute mark but things flow apace from there. It's hard to say too much else about it, only that what at first might sound impenetrable and self-similar offers much more upon concentrated listening--very satisfying.

Originally 'Sileen' was composed for a festival in Belgium and this new piece is recorded in "the same pitch and tempo s its predecessor, then slowed down in post-production to half its speed and one octave lower". The player on this CD is Gareth Davies, who plays bass clarinet, unlike the first version which was performed by fifty players from the local music school, while Rutger adds a bit of his electronics. Zuydervelt says: "There’s three groups, and each have 4 or 5 sets of repeated chords of exactly one minute - fading in and out like a wave. Each set of repetitions is followed by a silence of the same length before presenting the next set. Since the amount of repetitions is different for each group (2, 3, and 4 times), the overlap shifts and differs each time." It is a beautiful piece of music, very slow, very majestically moving in and out of the picture, with those one minute length pieces and a bit of silence following that, but it is more or less quite a continuous piece of music and each of forty plus segments it never sounds the same. Obviously they are closely connected, but nevertheless sound actually quite different. It has a great modern classical feel, very much alike Alvin Lucier or Phill Niblock, I thought, but then if they would cut up their pieces into smaller segments and fading them in and out. Well, and perhaps Zuydervelt has more variation up his sleeve. In the last nine minutes everything comes together and there is just one long drone of multiple (all?) segments together. This is a most refined CD and Zuydervelt's most classical release up until now.

Sometimes the coincidences in one's life appear so precisely charted to become momentous events that it's hard to think of them as the ramifications of stochastic processes as they actually are. Take for example Sileen II, a work that acquired a completely different shape and complexion in the studio version as opposed to its genesis in 2016, fully orchestral and therefore influenced by the individual predispositions and physical strengths/weaknesses of the involved players (the whole story is narrated by the composer in the liners).

Whereas the fruit of the original commission was a collective texture born from the alumni of a music school, for this rendition Rutger Zuydervelt (known in other contexts as Machinefabriek) elected to restrict the palette to electronics plus a lone purely acoustic voice, the latter component embodied by renowned clarinetist Gareth Davis. To enrich a rather simple compositional anatomy — a constantly shifting ebb-and-flow of overlapping pitches alternating with silences — the mere timbral juxtaposition was evidently not enough for Zuydervelt, in spite of the quasi-Niblockian assembling methodology. Dissatisfied with the result, he was aided by a stroke of serendipity when attempting to slow the piece down at half-speed to quickly realize that the target had been hit.

Indeed these 50 minutes represent now a transitional utopia of much needed internal calmness. The natural intensity of the vibrating matter allows a responsive listener to perceive otherwise uncatchable frequency beatings, extemporaneous clusters, murmured undertones and mind-aligning resonances as an antidote against the conflictual signals disseminated by the quotidian. The ensemble's inevitably flawed humanness has morphed into a self-sufficient sonic organism incapable of spelling words like "wound" or "regret". Even when a relieving hum highlights them. 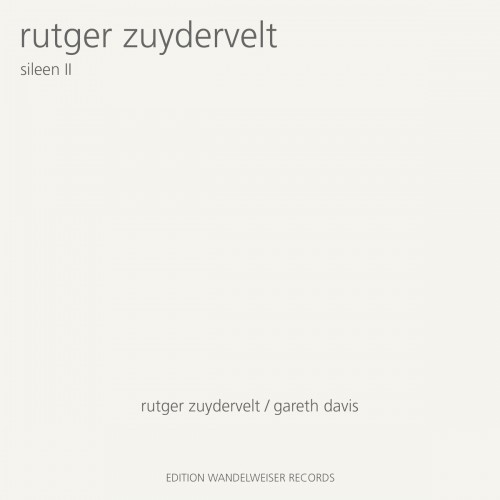