This mini album captures the live improvisation I did with One Man Nation (Marc Chia) at the Future Sounds of Folk Festival, at Bimhuis, Amsterdam. A very dynamic concert recording, full of electronic blips, sharp beats and persistent sine waves. The track is complimented by a remix from each of us.

Watch a video about the Future Sounds of Folk

The cd costs 10 euro including postage

In recent years the artificial lines demarcating the fiercely guarded frontiers of music genres and sub-genres have been consciously on the retreat; The Wire magazine's annual year-end round up of the musical heights features the category "Transgression" and later renamed "Outer Limits". The difference between this"genre" with others are often superfluous and categorically unstable. Are we talking about the means of production or are we talking about a set of specific sonic signifiers or the nature of the creation? So if a electronica-sounding album is created using pure improvisatory means and its sounds like Merzbow on downers, then is it elactronica, electro-acoustic Improv or Noise?

One Man Nation and Machinefabriek's new mini-album is a case in point here. Judging from past works of the two artistes, Singapore's One Man Nation prefers a tactile interface between his laptop on one hand and his analogue equipment on the other while Machinefabriek (from the Netherlands, who have an illustrious record of collaborative works, albums and other projects in his bag) generates electronic music informed by modern classical and drone and thus One Man Nation seems to fit more into the more typical younger generation of Noise/sound artistes who have emerged since the late 1990s while Machinefabriek's tones are redolent of contemporaries like Florian Hecker.

This album  seems to want to get out of the two collaborators' various past legacies and aiming instead for a "third stream". Ont the first track, titled "Live", the more elctronic sounding Machinefabriek and relatively more organic feel of One Man Nation's emissions can be discerned but what makes the track engaging is the attempts made by the two to interlock and work towards a synthetic exploration of sound and the surrounding acoustics of the venue. The slightly echoey resonance of the piece gives the listeners a sense of immediacy and uncertainty of its direction. But they are never overtly antagonistic and thus one goes away feeling an attempt at searching for a common live-compositional transcendence of everyday life. No high-faluting spiritual cosmic  goals or statements on the evil of meat-eating but it is just about living the moment of life intently and to me it shows thoroughly in the first track.

The two subsequent tracks are remixes done by each of the two participants and they are excellent electronic- tone pieces: One Man Nation's "OMN Remix" seems to merge the enigmatic drills and thumps of Autechre and Aphex Twin with the subtle undercurrent of a Fourth World vibe eventually coming forth towards the end with a sample of indigenous Indonesian music giving it a more Sublime Frequencies twist. Machinefabriek's "MF Remix" on the other hand, tricks the listeners when one first hears the opening few seconds of audience coughing in a live setting before the immersive slow cascading drones and underlaying blips take over and send the listeners to a state of alert-ful lull. 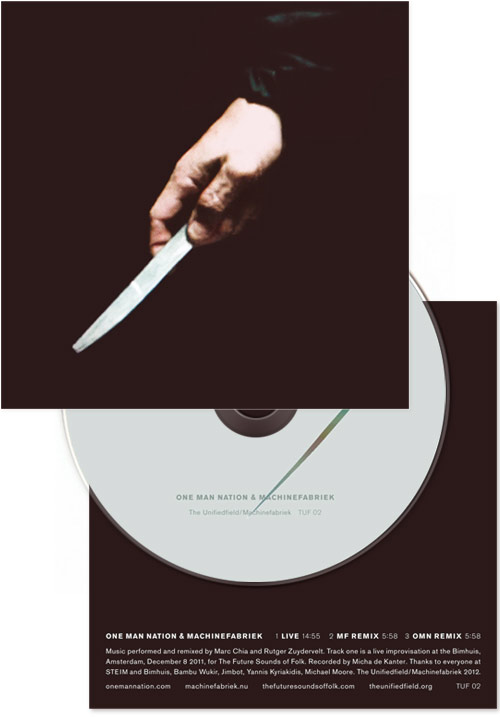