This is the second 7-inch in a series of three...
Constructed by Will Long and Rutger Zuydervelt,
Tokyo and Rotterdam, February/March 2012

Like its predecessor, the "Numa - Penarie"  7-inch single contains two relatively short tracks, built from tiny audio snippets perfectly crafted into sound collages. This single is somewhat like a short 'studio version' impression of what the live sets have to offer. Beautiful atmospheres, with sudden mood changes to keep you from dozing off.

Ordering this 7" single also includes the download of the digital version, also containing two videos created by Marco Douma: abstract video images that perfectly match the mood of their soundtrack.

A couple months back, we reviewed Celer & Machinefabriek‘s Maastunnel / Mt. Mitake 7″.  Since then, the two have toured together, released a postcard and download document (Greetings from Celer & Machinefabriek) and bookended the tour with this second 7″ offering, which continues in the vein of tender, processed ambience.  Included in the package is a download of two impressionistic videos from Marco Douma, which can be previewed via the release page.

The collaboration seems to have benefited both artists.  As two of the scene’s most prolific producers, their output has at times seemed overwhelming; the presence of a counterpart allows each to stretch boundaries and consider previously unimagined sonic twists.  As previously reported, Celer has developed a slightly more abrasive edge, evident in Bliksem‘s final minutes and apparent here at the 2:18 mark of “Numa”.  The rising drone and crunchy electronics enrich the short composition – a distillation of a longer work – by providing welcome contrast and an element of danger.  Like the cover art, this piece is a collage, and its strongest part is its promontory.  As the piece returns to its ambient base, the listener remembers where it has wandered.  The footstep hints of the fourth minute fall like mud dragged from the song’s center.

”Penarie” introduces the interruption earlier at approximately 1:23, dissolving into near-silence before floating down the river like the couple on the cover.  A very slight ticking climax (beginning at 4:00) yields to soft electronic ripples and brings the timbre back to where it began: a cycle completed in only ten minutes.
Numa / Penarie is described as the second part of a series, which means that more should be on the way; both artists are on the right track, and after three more 7″s, we should have a very nice album.

It’s on the usual ambient tip with subtlety being the order of the day. Haunting synths drift aimlessly on ‘Numa’ before focusing themselves with an abrupt thump and petering out in a digital frenzy to be replaced by the initial flow of ambient choral synth tones. Flip it and ‘Penarie’ picks up where ‘Numa’ left off - you know, ambiently. This side really reminds me Eno’s early ambient forays and again makes great use of choral synthesis to envelope the listening in warm and inviting tone. Very CHILL. Very ASTRAL. You know the score. Ltd. to not very many and won’t be around long enough for you to ponder it so you might as well order now. Thank you drive thru.

The 7" with Celer is more like one would expect to find from Rutger Zuydervelt, and perhaps Celer as well. Not exactly the kind of music one should put on the limited time frame of a 7" I would think, as these delicate drone patterns need their time to develop. Now it seems to happen a bit fast, but both 'Numa' and 'Penarie' are fine examples of what atmospheric and drone music should be like. It comes with a postcard to download not just the music but also two films by Marco Douma with interesting light patterns. In 'Numa' very abstract and in 'Penarie' outside with electricity cables and  bursting sunlight. Dreamy music and dreamy visuals. Excellent stuff. That's the way we like them.

Clearly satisfied by the outcome of their first seven-inch release, 'Maastunnel/Mt. Mitake', Will Long and Rutger Zuydervelt return for another installment, this one similar in concept and titled 'Numa/Penarie'. Put together in Tokyo and Rotterdam earlier this year, the two tracks contain original sound elements stitched together from longer source material, and the release is enhanced by its postcard collage presentation and two complementary videos created by Marco Douma.

The tracks themselves are a contrasting pair, the first 'Numa' very much in the Celer tradition in fashioning a mood of becalmed iridescence, even if some measure of turbulence briefly intervenes halfway through its five-minute run. 'Penarie' immediately distances itself from the other in opening with horn-like synth flurries, though it, too, gravitates repeatedly in the direction of soothing splendour. In both pieces, one often witnesses an ongoing oscillation between the ambient stylings of Celer and the rougher textural play of Machinefabriek. Needless to say, that's a good thing, as the collaborators' respective tendencies render the material less homogenous and predictable than it otherwise might be.

Douma's videos form a nice part of the package as they evolve in accordance with changes in the musical textures—as the music becomes grainier, so too does the video display. 'Numa' offers a logical analogue to the musical material as it's abstract in nature but powerfully evocative, with the visual content suggestive of sunlight reflections on rippling surfaces and showing geometric shapes viewed through a prismatic mist. By contrast, real-world elements, such as electrical towers and hydro wires, appear more identifiably during 'Penarie', though the video retains the dream-like quality of 'Numa'. 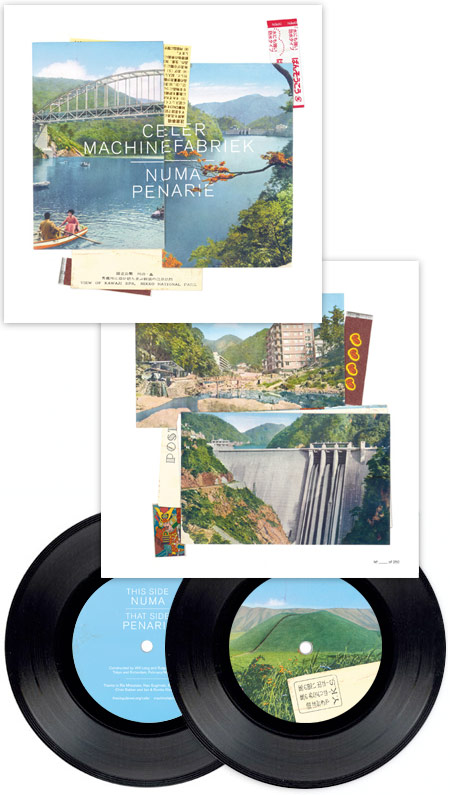