A live performance with Ralph Steinbruchel, recorded at Kunstraum Walcheturm in Zürich, using samples from my piece 'Stofstuk'. You could call this a live remix of that piece i guess. It's a 22 minute clash between my grainy analogue effects and Steinbruchel's digital beauty.

SOLD OUT
but available digitally, here

Following his long string of 3" releases Machinefabriek is now expanding more and more his horizon and ready to take over the world. To reach that goal, Machinefabriek collaborates with others, such as Freiband, Stephen Vitiello or in person with Ralph SteinbrÃ¼chel. A mere two weeks ago, Rutger Zuydervelt was in Zürich to play a concert and did a concert with Steinbrüchel, all based on samples from Machinefabriek's 'Stofstuk', of which he also released a double CD with remixes. In twenty two minutes the two stretch out the music into a wealthy tapestry of sound, with a big gigantic flow underneath and on top things flow in and out of the mix. There is a certain roughness to the music that no doubt has to do with the fact that this is a live recording, but its a roughness that I quite like. It keeps the listener attention, and presents him from lulling asleep, which might have done when it was a more subtle studio version. Heavy mood music for heavy moods. Spacious but with a strong bite.

Marking a return to the 3" format, Rutger Zuydervelt teams up with the
reliably brilliant Ralph Steinbruchel for this release, a document of
their performance at Zurich's Kunstraum Walcheturm, which took place
only a fortnight or so ago. Using Machinefabriek's 'Stofstuk' as a
starting point the duo weave a shifting dronescape that marries
Steinbruchel's knack for high frequency precision and detail with
Zuydervelt's noisier, more industrial approach. Based on their
discographies to date, it sounds like Steinbruchel dominates the first
ten minutes, establishing time-suspending tonal stasis and a high
register crackle that casts a fine polish over the whole experience.
After that ten-minute threshold is crossed the keenness for detail and
glossy minimalism ebbs away only to be replaced by a steely grey drone,
as if storm clouds suddenly appeared over the mixing board, churning
out rasping feedback overtones and a kind of hollowed out distortion.
Soon after, that high frequency activity starts to throw some colour
back into the piece, before it all ultimately ignites into a rumbling
jetstream at the end, fading out as a fuzzy vapour trail.... Brilliant
stuff. 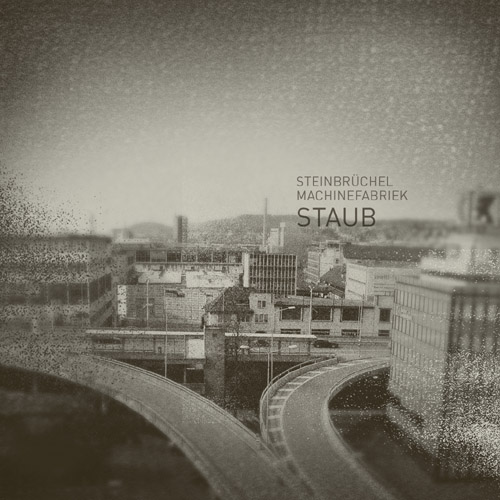