Order on Bandcamp
or to order

L’incertitude, is Bruno Duplant and Rutger Zuydervelt’s first album as a duo. It came together very naturally, as if they played together for years already. There were no long discussions or conceptual heavy-handedness, these two tracks of pure sound exploration in the most intuitive sense, just flowed from the remote collaboration and the back-and-forth swapping of materials and compositions. The core of the collaboration rested upon trusting each other’s capabilities and on the mutual appreciation for each others' work. These two collage-like trips are loaded with suggestions of (otherworldly) spaces and places, but it’s the listener’s imagination that has to fill in the blanks.

L’incertitude has spent life in two separate countries, but in spite of its long-distance discourse, it offers a natural, uninterrupted flow of sound. For Bruno Duplant and Rutger Zuydervelt, the collaborative process was smooth and intuitive – there were no lengthy discussions, and that has carved a creative outlet into the music, allowing it to be more expressive and loosened from the stresses and pressures of expectation.

The two tracks were fired through digital cables, streaming through to the other musician via European bandwidths and long distances. Although recorded remotely, L’incertitude is a connected, united album, and one with a strong bond. And because of mutual respect, the music is elevated, the distance appearing to be stronger than an album produced in one room, when everyone is together. It’s all about the artists gelling with one another. You can’t fake a musical bond; it’s either there or it isn’t. Mutual respect and appreciation makes all the difference, turning a collaboration into a special project.

Duplant is a composer, residing in Northern France, while Zuydervelt lives in Rotterdam. Perhaps the most important – essential, even – aspect of this collaboration, and what makes it a success, is the trust and friendship on display. Respect is a key element to the music, sticking like an adhesive to every sound, making it whole and complete. From emptiness, structures are built inside the music. Some of the swirling textures are minimal, at least to an extent, vibrating with a frisson of tension, but there’s a mass of emptiness within the music; like a huge sinkhole in the middle of the street.

From within, the music slowly revolves and gathers, constructing something from its inky depths, rising up with a dynamic burst. Scattered over its ground zero are murky field recordings which include a wailing baby and birdsong…but even these sounds are distant, coming from a portal or a gateway, instead of living in close proximity. Like a static-eaten police band picked up on an amplifier or a radio, it’s a secret bandwidth that has somehow crossed over, reaching with long fingers into the listener’s domain.

Spontaneous stabbing electronics are a feature of the second piece, which expands on its musical selection and seems bolder, more experimental. Multiple sounds were exchanged, but space has been preserved. There are rivulets for the listener to fall into, to interpret, and to become part of the creative process by way of their imagination, filling in the blanks, and the well-timed artefacts are fascinating to behold.

Collaborations are another thing that is on Zuydervelt's plate for many years; with Gareth Davies, Tim Catlin, Subterreanact, Anne Bakker, Chris Dooks and loads more (I thought for once not to mention the more famous ones). This was mostly as 'Machinefabriek & ...' but maybe it's wiser, if the other also doesn't use a project name, to use the name Rutger Zuydervelt &, well Bruno Duplant in this case. After all the music I heard from Duplant, I still have very little idea what he does; that's what I also noted when I reviewed his 'Feu Danse' release. Let's say he is, just as Zuydervelt, a man who loves field recordings, electronics, instruments and processing. I assume this was done through an exchange of sound files for x-number of times, before arriving at the two twenty-some minute pieces here. Both pieces shamelessly show us, two men, who love their sounds, and whatever you can do to sculpt it into whatever you want. They elegantly move back and forth between high and low sounds, quiet and loud parts and clear field recordings and heavily obscured ones. The ego of either musician has disappeared from this and we have no longer an idea who does what here. And perhaps we don't want to know either; it is not of great importance to see that Rutger did this, and Bruno was responsible for that, as what counts is the overall results, the interaction of them working together, and I am still assuming this was all done via long-distance exchange of files. I have no idea if there was a plan to follow, a score, an idea, or if it was all just let's toss a whole of sounds in the air and see what happens. I am hoping for the latter, as that's how it sounds, free from concepts and let the flow go as it goes. That works very well here and it is almost enjoyable release. Seeing Zuydervelt have return visits with some of his previous collaborators, I hope that Duplant is among them.

It’s a funny need to want to introduce an artist in every blog-post but by now I can safely assume that Rutger ‘Machinefabriek‘ Zuydervelt needs no further introduction. And, with over 60 albums released since 2009, Bruno Duplant should need no introduction either – although I must confess his name is not very familiar to me. Shame on me, it seems!

Their first collaboration album, created from ‘field recordings, instruments and processing’ is released on the Crónica label. The two (+- 22 minute) tracks ‘of pure sound exploration’ were created without ‘long discussions or conceptual heavy-handedness’ – so they may be viewed as ‘improvised’ somehow, even though they were created by swapping sound files.

The fact that each artist’s contribution is indistinguishable shows that they are well-matched. This is not a ‘first you – then me’ mix: both tracks feel like a complete composition.

The French titles reflect the current times, even though the sounds were recorded in 2019: L’Incertitude means Uncertainty. The first track Le Doute (doubt) is full of haunting suspense; the second is called L’espoir (hope) and is indeed more peaceful even though some incertitude remains lurking underneath. 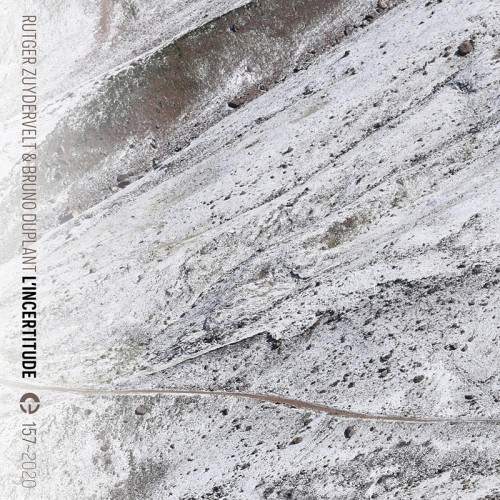