A soundtrack to accompany a film made by Mike Hoolboom using photographs taken by notorious bank robber Alvin Karpis.

In the film (which is still in the making, working title 'Secret Photographs'), the music will be accompanied by a voice-over and additional field recordings. On this album though, the original score is presented in it's pure, unhurried form.

Notably, Secret Photographs is a soundtrack to a Mike Hoolboom film that has not yet been completed. I say "notably" because I generally avoid soundtracks, as by their very nature they are not meant to stand on their own–they exist to provide coloration for a visual component. It is very rare for one component of a multimedia work to dazzle me when decontextualized from its intended whole. The infrequent exceptions tend to occur with experimental cinema where music tends to either drive or share supremacy with the images. Hoolboom's unfinished film certainly seems to fall within that category, but it probably does not hurt that the music was completed before the film.

It probably also helps that the film sounds quite fascinating, which no doubt played a role in inspiring Rutger to compose some of the most beautiful music of his career. Essentially, the completed film will be an unfolding series of still photographs by Alvin "Creepy" Karpis slowly dissolving into one another. Karpis was a key member of Ma Barker's infamous gang in the '30s and a former Public Enemy #1 to boot (no small accomplishment). After a long incarceration and some time exiled in Canada, he spent his final years living in Spain where he developed an intense obsession with photography. He never showed these photographs to anyone, but they eventually surfaced on eBay and Hoolboom wisely pounced on them, thus beginning the chain of events that led to this album.

Each of the three pieces here spans roughly twenty minutes and maintains an overarching aesthetic of fragile, lonely shimmer and near-static, glacial pace. The degree of Zuydervelt's ultra-minimalism varies quite a bit from piece to piece, however. The most minimal of all is the opening "Part One (Black and White)," which is based entirely upon the shifting harmonies of a few artfully blurred and slowly changing tones. Notably, I cannot tell which instrument they may have originated from, which imbues them with a rare beauty and purity. Normally, that also comes with a loss of character, but that does not occur here, as the evocatively drifting and forlorn atmosphere is perfect just the way it is. Also, Rutger deftly employs quiet field recordings of ambient outdoor life and distant cars to provide a very real sense of (lonely) place.

The second piece, "Part Two (Colour)," is a bit closer to what I normally expect from Machinefabriek: a slowly unfolding and melancholy guitar figure that ultimately coheres into a swelling drone. As such, it is not nearly as revelatory as the other pieces on the album, but it provides a very necessary contrast  and is quite good for what it is. Also, if I listen extremely closely near the beginning, I can hear something that sounds like a very menacing pack of barking dogs, which changes the whole mood of the piece for me. It is so buried, however, that it could easily be any number of other things, ranging from a distorted, distant television to simply a processed loop of Rutger's fingers sliding over his guitar strings. I like mysteries and hidden nuances, especially if they can be construed as somewhat disturbing.

Zuydervelt saves his most inspired piece for last, as "Part Three (Black and White)" is essentially a reprise of the opening piece, but arguably more brilliant and definitely more disquieting. The changes are quite small in scope, but have a dramatic cumulative effect on the overall mood, which decisively drifts into rather hallucinatory and nightmarish territory. As near as I can tell, the various tones simply cohere into uglier harmonies, giving rise to subtle pulses and oscillations. Also, the tones are slightly more harsh and distorted and the natural sounds of "Part One" are replaced by undulating swells of hiss and crackle. It is quite a mesmerizing and haunting piece in its own right, but works even better within the context of the album, ending the dreamlike drift of Secret Photographs in impressively uneasy and disturbed fashion. I especially enjoyed the soft "pop" at the end, which seems like Rutger breaking his surreal spell by simply and matter-of-factly turning off his amp.

Within the context of Zuydervelt's sprawling discography, Secret Photographs is probably not the best place to start, as several other Machinefabriek albums offer much more in the way of immediate gratification. Artistically, however, this album is an unquestionable highlight and absolutely essential for existing fans of Rutger's work (or of innovative sound art, in general). Very few albums reward attentive listening as richly as this one.

I’ve become a little obsessed with the works of Rutger Zuydervelt aka Machinefabriek over the past 18 months or so. It all started when I first heard the amazing Veldwerk compilation which was almost the perfect blend of field recordings, drone, noise, electronic manipulation and sonic experimentation. Since then I’ve tried to track down most of his readily available records and not once have I been disappointed. I think the main reason for that is that Zuydervelt isn’t beholden to one particular sound. Although it was his processed field recordings that sucked me in, it is commissioned  works for dance and film that keep me coming back.

The soon to be released Episode 23 of The Antidote Podcast will feature two of his more recent works, the challenging Doepfer Worm and the sublime piece written for the Moscow Ballet, Attention, the Doors Are Closing, and because this blog doesn’t necessarily focus on new releases I thought I’d start with Secret Photographs, the 2012 soundtrack to the film of the same name.
I’m not sure if the film has seen the light of day as yet but it was to focus on the photographic obsession of Alvin “Creepy” Karpis, a 1930′s gangster that spent his final days in Spain. After he died a large  number of photographs were discovered and sold on ebay. The director of the film Mike Hoolboom managed to purchase them and the idea for the film began.

The soundtrack is made up of three long pieces which span a total of 70 minutes or so. Each of the tracks focuses on a minimal, shimmering drone. That seems to be a term I’ve used before but to further clarify – Secret Photographs is drone in a fragile, Stars of the Lid kind of way rather than the painfully pitched drone work of say Hototogisu. This album is a great staring point for anyone interested in minimal drone work. Indeed it is in a select group of records that manage to stay true to it’s ascetic without ever becoming boring. Simply stunning.

Film scores have provided Dutch electroacoustic musician Machinefabriek with the occasion for some of his best work, with 2011’s “Sol Sketches”, an album of music composed for Chris Teerink’s film about Sol LeWitt, a recurring feature on end-of-year ‘best of’ lists. “Secret Photographs” is another collection of music created for the screen, this time for Mike Hoolboom’s film comprised of photographs taken by notorious gangster Alvin Karpis after his release from Alcatraz, images he refused to show to anyone during his lifetime.

It’s true that both photography and music are capable of representing and evoking a wide range of feelings, but it often seems to me that the best photographs, the ones that leave the strongest impression, are those that avoid making any concerted play for emotional response or intellectual assent, those that choose to present merely what they are, a simple resemblance, all surface. “What you see is what you see,” Frank Stella once said, about painting actually, but perhaps he was onto something. Maybe I like this muteness because it makes me feel close to that originary moment of direct knowledge that remains forever inaccessible, yet tugs so insistently at the sleeves — that moment of world-light hitting retina, of full and immediate immersion in an experience, in the blink of a shutter. The photograph on the cover of “Secret Photographs”, presumably taken by the ex-gangster, showing a woman standing by the window holding up a squeegee, is like this.

The soundtrack Machinefabriek has composed possesses this same muteness and immediacy, no tricks designed to break the heart or induce epiphany, just sounds offering up their bare, unmediated selves (the subtlest of illusions, but a very effective one). What does show through, however, is the level of refinement and attention to detail put into these three long-form tracks, for example in the perfectly balanced juxtaposition of warm sine waves and crackling hiss in “Part One”, or the almost imperceptible metamorphosis from trippy blues guitar to ringing drone in “Part Two”. One could say that “Secret Photographs” is a demonstration of just how accomplished a composer Rutger Zuydervelt has become, if one is prepared to overlook the simplicity of equating accomplishment with a certain kind of technical refinement, which would no doubt be to do earlier, less focused works, such as the excellent material compiled on “Veldwerk”, an injustice. Yet it’s hard to avoid the image of a potter who, after a long period of daily work at the wheel, an iterative process of honing and perfecting, produces a pot that in its singular form manages to encapsulate just how far he has come. 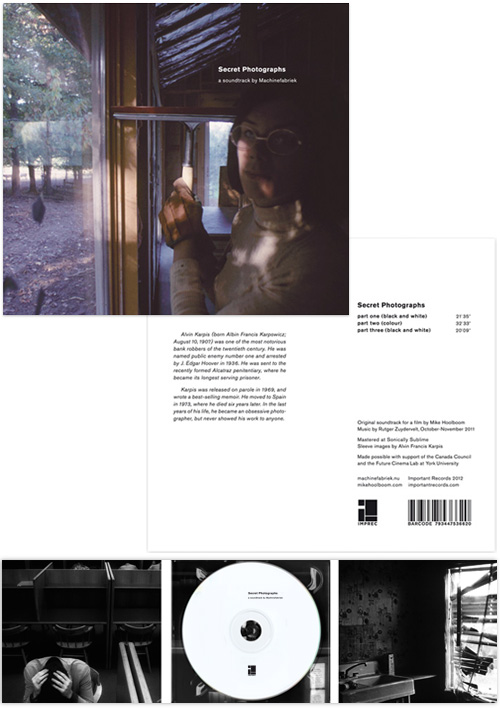