VINYL AND CDR SOLD OUT
But available here, in digital format)My first tour in Russia resulted in the 3-inch cdr 'Rusland', in 2008. The second time I performed solo in Moscow and Saint Petersburg was in 2014 and recordings of this can now be found on 'Rusland II'.

The music consists of two parts, constructed from recordings of the gigs I played. That's DI Telegraph in Moscow, at the SA))m0st'10 festival, September 22, and the next day at the Fulldozer festival in DaDa, Saint Petersburg. Although it's edited and reconstructed, it stays pretty faithful to how it sounded at the gigs (including the chatter). I tried to preserve/capture the energy I experienced in these venues but also in Russia in general.

'Rusland II' is released in two physical formats. There's the 3-inch cdr, once my format of choice, but now the first in years. But if you've got a bit more money to spend, there's also a limited 10-inch vinyl master cut (dubplate) edition, released by Champion Version. That's a bit like a lathe-cut, but with superior quality. 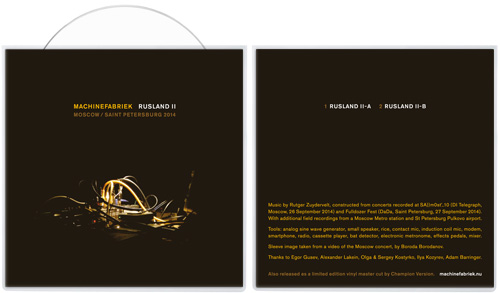