A1. The Pike Knowes the Loupin' Stanes
A2. Betamax and Dictaphones
B1. Ewe Knowe the Girdle Stanes
B2. Settlement

A collaboration with Ayr based musician PhD doctoral researcher Chris Dooks, based on the recordings of an old harmonium (hence the title) he made.

The album comes on red vinyl, with a full printed inner and outer sleeve, feauturing photos by Chris, and graphic design by yours truly.

Chris Dooks and Rotterdam-centred Rutger Zuydervelt (aka Machinefabriek) are both musicians who trained as visual artists, making their collaborative LP The Eskdalemuir Harmonium an encircling and broad enterprise both sonically and as a sound-object.

The full-length site-specific work is orientated around a landscape which is home to a vast Tibetan Buddhist temple and megalithic stone circles. The resulting vinyl and(expanded) digital package from Canada's Komino Records is a fusion of 'folktronica-concrète' homages to a dying American harmonium - currently disintegrating in a farmhouse near Lockerbie, Scotland. As a result, the LP may appeal both to vinyl and electronica aficionados but also a parallel audience - those interested in the heritage of the Scottish-North American diaspora.

The record, made over a twelve month period, includes a five minute radio documentary also committed to wax in the package. In addition, Dooks' essay and photographs of the year-long process have been stitched into a full colour montage, typeset by Zuydervelt - who also works as a respected graphic designer. The record itself is lovingly finished as a bright red vinyl pressing.
Much as one visits a sick relative in a care home, The Eskdalemuir Harmonium is a form of 'sonic palliative care' which spills into the glitch territory of, say, Stefan Betke's work as Pole, this is also, at the same time, rooted in a sonic ethnographic tradition that is akin to 'The Radio Ballad' (formed by Ewan MacColl and Peggy Seeger) where spoken word, field recordings and music unite to form a greater-than-it's-sum of bricolage parts.

Chris Dooks spent much of the 1990s directing TV documentaries, including a South Bank Show feature on Robin Rimbaud (aka Scanner). Now a musician and interdisciplinary artist in his own right, his work retains elements of what photographer Walker Evans once called “documentary style”. For “The Eskdalemuir Harmonium” he enlisted Dutch electroacoustic wizard Rutger Zuydervelt, otherwise known as Machinefabriek, to help him explore the sonic potential of an old decaying harmonium residing in a barn in the Scottish village of Eskdalemuir. Sounds taken from the instrument are interwoven with field recordings made in the local area, which is home to both a Buddhist temple and megalithic stone circles, as well as spoken tales of the charismatic Texan who brought the harmonium to its current location.

Sounds are often thought of as being ephemeral, existing only in the ‘now’ of their hearing, but from another perspective it could be said that sounds have histories of their own that connect them to other histories, such as those of people, communities, and places. In “The Eskdalemuir Harmonium” the multiple narratives of the instrument’s sounds begin to be teased out: their status as sonic family heirloom, their role in the folk music and religious traditions of both Scotland and southern United States, and their production as a form of what Dooks calls “sonic palliative care”, referring to both the instrument’s dilapidated state and his own chronic illness. Although the sounds act as a form of transmission, allowing personal and communal knowledge and experiences to circulate across generations, this is not simply a form of archival preservation, a notion easily conjured by the term ‘documentary’. Instead, the harmonium is allowed to speak again anew, in a thoroughly contemporary voice that is musically innovative and compelling.

Dooks and Zuydervelt’s work can thus be conceived as participating in what performance theorist Diana Taylor calls the “repertoire”, the reiteration and elucidation of cultural knowledge through the newness and liveness associated with performance. By choosing to use this historically weighted instrument to produce something fresh, the album downplays a static view of the documentary archive that privileges fidelity to a presumed authenticity and origin that the archive itself stages and frames. Instead, the music could be said to emphasise the notion of a specific document — specific to a time, a place, and a context that includes present situations, rather than embalmed in an unchanging eternal moment located in an unreachable past. All of which is perhaps a long-winded way of saying that while the album considers the past, it is not weighed down by nostalgia. The Eskdalemuir harmonium will not last forever, but while it lasts, it performs something living and vital.

The release will be available from Toronto-based Komino Records in bright red vinyl, with a sleeve beautifully designed by Zuydervelt incorporating Dooks’ essay and photographs. There will also be a digital edition, which I hope will include the essay, for the benefit of us non-turntable-owning folks!

Before you listen to The EskdaleMuir Harmonium there are some items to get ready. You need a record player, because this is a release lovingly designed on pressed red vinyl. Preferably you’ll have a fairly nice record player with a needle that isn’t scratchy or dusty and a sound system set up where you can hear the modulation between treble, bass and mid-range and you’ll have all of that set up in a room with no ambient sounds and no distractions.

Got this sorted ? Put down your smartphone, turn off your mind and put the needle on the lead in groove on The Eskdalemuir Harmonium.
This release is a situated sonic work by Chris Dooks, artist and musician. It is inspired by a Harmonium found in a state of decay near Lockerbie and the site of a vast Tibetan Buddhist Temple in Scotland. Dooks has produced this release in a collaboration with Machinefabriek: musician/sound artist and graphic designer Rutger Zuydervelt. Together, they have produced a Blumenthal style sonic, imaginary journey.

In the recipe book for Dooks’ “Folktronica” are sound captures, sampling, dictaphones, video machines, cameras and a sinaesthetic understanding of the connection between sound and image. Does that sound a bit..well…arty. Yeah. We know. But this isn’t airy fairy stuff. To be clear, there IS airy fairy stuff inherent in this sonic work, but you can listen to this release without getting into those aspects and it stands up on it’s own.

Immediately into the opening track; ‘The Pike Knowes The Loupin Stanes’, the Harmonium is breathing frail notes and as it does so, introduces a sonic harmonic drone that runs throughout the record. Scattered amongst the meditative drone are footsteps, the sound of rain, a child talking and artificial, electronic sounds. Then the listener gets it. Wow. There truly is a sineasthetic brilliance in this recording.

Each sound is layered in such a way that you visualise yourself right there, seeing the landscape, hearing noises far away in the near distance or right by your side. On top of that, each of the noises are brought together tunefully and melodically. As you are getting used to this sonic-visual journey and have comfortably settled into the drone rhythm 12 minutes later, the sounds gently fade away. Wow again. We even found ourselves breathing in time with the drone – the Buddhists would be pleased.

As if Dooks / Machinefabriek know the listener will have questions, the second track: ‘Betamax and Dictaphones’ is an audio-interview about the Harmonium, talked about lovingly and with humour. For many people this piece is the introduction to The EskdaleMuir Harmonium as this segment has been used on Radio as a dialogue about the source of the work. It is this piece that sets up anthropomorphic elements that help to explain why Dooks has described this piece as ” Sonic Palliative Care “.  There is a eulogic feel in the devotion to the Harmonium and the Buddhist Drone adds to the sense of marking time and people passing.

Side 2 picks up where ‘Loupin Stanes’ left off with ‘Ewe Knowe The Girdle Stanes’. As this track continues,  it feels as if you have walked further away from the Harmonium and are listening to echos of the clunks of machinery past. There is a sense of the album coming to a close and the meditative samples lull you into the final piece, ‘Settlement’.

In ‘Settlement’, the Harmonium seems to be struggling and the music is not so harmonic, like last breaths. As the track fades out, it leaves you with a fondness for the Harmonium that can’t be accidental. We think that Dooks understands very well how to make sounds create images and create emotions. It’s musical, visual, temporal, clever stuff indeed.

The EksdaleMuir Harmonium has contemporary written all over it in the use of electronic technicality reminiscent of ambient 12′s. The ‘tronica in Folktronica blend together all these the ideas and the samples that have been collated, curated and snipped and moulded by the duo.

The entire release has enormous scope. It is in the creation of this musical landscape why it isn’t essential to have a top end record player to listen to the EskdaleMuir Harmonium, but it really would help.

This is an extra-to-ordinary record. Not progg-y but progressive. Electronica lovers will get this, ambient lovers will get this and it is a work of art also. If you sit on the Tronic or Folktronic camp, it doesn’t disappoint. Dooks has introduced a new type of 360 degrees sound.

Buy, listen to, nurture and keep lovingly in your collection.

Authentic, synthetic, living, languishing, animate, inanimate, well, ailing, history and the now: these are the explorations of the latest collaboration of Chris Dooks and Rutger Zuydervelt (Machinefabriek).  Like many, I have always been drawn to the old and mysterious, wanting to know more about the history of things, the times in which they existed (and in this case, what hands and feet brought these venerable machines to life).  Harmoniums are vestiges of another time (mostly from the late 18th C through the middle 20th C), inanimate objects, strangely biomorphic in their inner workings that are revived with physical exertion, air in their bellows (the lungs) and resonant metal reeds producing the sounds (the vocal chords).  Neglected harmoniums often mournfully creak and object to being revived after long slumbers.  A friend of mine once used the term “lumbering harmonium” to describe his relic on an instrument—curiously descriptive in both reality and material (when the verb is used as a noun). 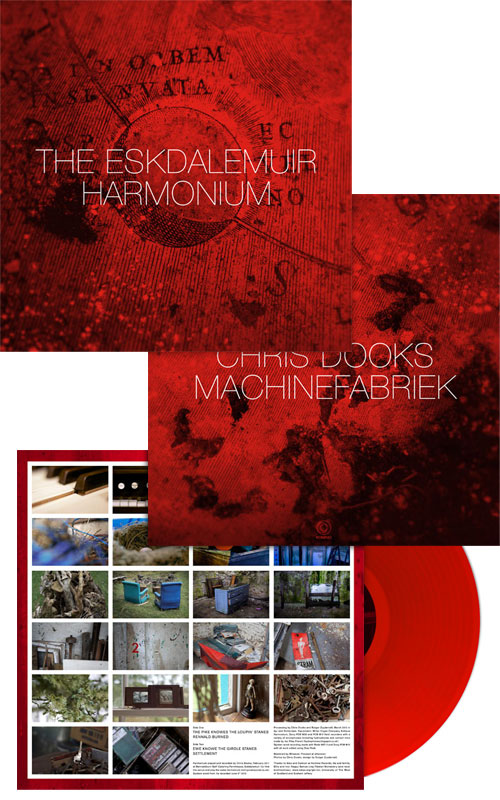