In March 2012, we had a tour of the Netherlands and Belgium together with Kleefstra|Bakker|Kleefstra. Seven gigs in total, which were all improvised. It was the first time we played together, and we didn't rehearse. It might not have been brilliant all the time, but there was definitely some kind of magic going on sometimes. Not knowing what the other would do, these concerts were as exciting for us as (hopefully) for the audience. Trying to do something different each time, things gotweirder and weirder with each performance, up to a point where it became really hard to keep a straight face while performing. It was simply a whole lot of fun, and an experience that seems worth sharing.

The physical part of the 'Greetings from Celer and Machinefabriek' tour set consists of 8 postcards featuring snapshots from nearby the concert locations (which are not always the kind of images the local tourist board would publish, by the way). From the tour impressions written on the back of the cards we learn that the tour was great overall, but the closing night at Drachten obviously turned out to some kind of unexpected anti-climax: "Not to be rude, but this was almost like performing in an elderly home."

The digital counterpart of the set features a recording of sets from the full tour: almost 3 hours of improvised music for a ridiculously low price of only 5 euro (including the postcards)!

I expected that all sets would be somewhat identical in a tour like this. But I clearly misjudged these guys' improvisational talents! ?Of course, the overall feeling is similar across these tracks. There are some distinct elements and themes returning at different times and in a different context. ?But there's always something different happening: Celer creating atmospheric background drones while Machinefabriek is constantly busy manipulating all kind of wired objects. The result is a fascinating blend of dreamlike drone-backgrounds, found sounds, radio fragments, spoken word and environmental recordings. A lot of room is left for spontaneous incidents (and coincidental humor, like a hunter elaborating on 'elk talk', or a voicemail recording of someone asking for help because 'the internet won't start up'). Even after listening to the full three hours I still felt this roller-coaster ride was over much too soon! 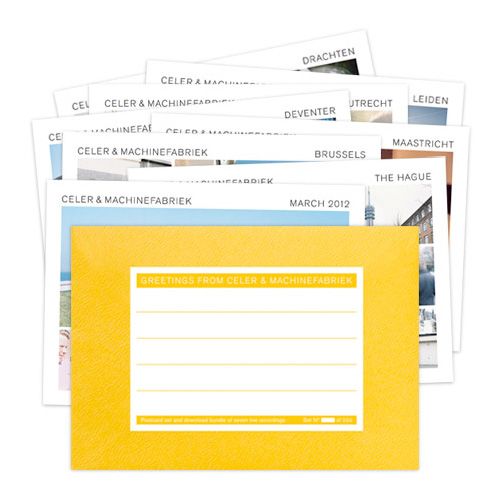 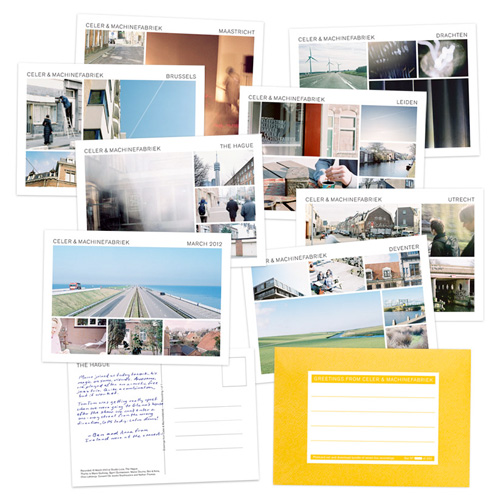