Based on the random sample play system that's also used for this site. Sparse and intimate. Contributions by Espen Reinertsen (Streifenjunko) on saxophone and Mariska Baars' (soccer Commitee) voice.

Things just don't seem to slow down for Rutger Zuydervelt, also known as Machinefabriek, but then a fabriek (which means factory in dutch, in case you wondered) should always work, right? Zuydervelt writes that we shouldn't regard this as the follow up to his main works "Marijn", "Ranonkel" or "Dauw". The title doesn't deal with the tracks on the release which should be played in shuffle mode, but rather with some random shuffle thing that you can find on his website (and installed there by his long term friend and former Dagpauwoog member Gerco Hiddink), in which he loads on or two sounds and then it plays by itself. Or some such, if I understand well. The nine pieces here are named after the instruments used, such 'Acoustic Guitar, E-bow', 'Autoharp, Vinyl' or 'Piano, Voice'. This might seem a hit and miss approach, and obviously we are unaware of the various stages of editing Zuydervelt may have applied to it, but rest assured, this is still top Zuydervelt music, of the kind that he started with... exactly "Marijn" and has expanded later on, on his real CDs but also on his various collaborations and 3"CDR releases. Nice, sparsely orchestrated music. Take 'Piano, voice': a few notes played on the keyboard, some sustained female vocals (courtesy of Mariska Baars of Soccer Comittee) humming nicely. I am not blown away by some of the use of reverb on this release but such is life. Otherwise I think this is a pretty strong release.

It's hard to believe that it's been almost a year since Rutger Zuydervelt helped nail our jaws to the floor with his exceptional album 'Dauw'. It used to be that there was a new Machinefabriek album almost every week (sometimes two or three) but since 'Dauw' it seems like Rutger's slowed down and withdrawn into a self-imposed silence . And that's no bad thing - 'Shuffle' is his first self-released record in some time and it shows in the near-obsessive quality of the record. You see, this album is far from the dense, slow-moving drone that Rutger made his trademark; rather it focuses on a different area of the experimental music spectrum. Taking cues from the understated bliss of his release on 12k and the more minimal moments of 'Dauw', Rutger has stripped his sound back to only a precious few key elements, and those elements have ended up as the song titles. Apparently the tracks were edited from randomly organised sound fragments (hence the title 'Shuffle') but with each track only using a maximum of three elements, the pieces manage to breathe through an invisible sheet of negative space. The simple pluck of an acoustic guitar string cuts through the hum of its partner the E-bow, a tapped autoharp sits atop a flock of vinyl static and the smoky sustain of Espen Reinhertsen's saxophone finds itself wedged between the buzz of a radio and the gentle hum of a cassette tape. As the album draws to a perfectly-timed close we're drawn into the whirl of a reel-to-reel tape player and the more familiar sound of Rutger's electric guitar. Subtle and mesmerising, this is all he needs to do - sometimes less is most definitely more. Buy it. 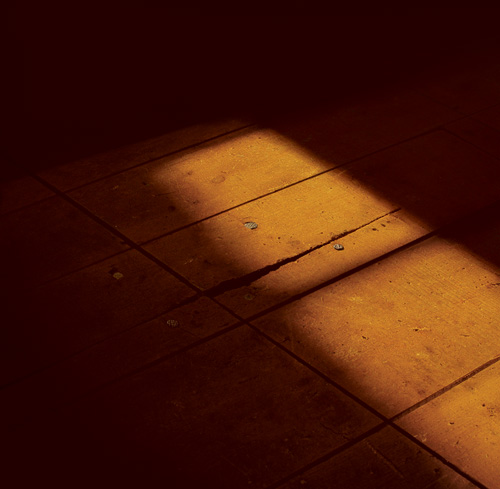