Sold out
but appears on the compilation Daas

'Koploop' is a single, 20 minute dose of wistfully unfirling ambience which moves with unruffled and gentle phases. Analogue chimes and long-hled, harmonically sumptuous chords swell, a stately organ shimmers in the depths of the mix, and Greg Haines and Anne Bakker provide artful cello and violin parts. It's a thing of unassuming beauty.

And of course there is Machinefabriek, who in this week's contribution to world of music works with soundsources supplied by Greg Haines (cello) and Anne Bakker (violin), whereas Zuydervelt himself plays guitar, banjo, organ,laptop, memorecorders and effects. The piece is separated in two parts, flowing into eachother. First there is ten minutes of careful strumming long sustaining sounds. Here all instruments are hard to decipher, even when there are subtle waves above the rest. In the second part, things are more recognizable and each instrument, especially the violin and cello play melodic bits that are more there upfront in the mix and things almost turn semi-classical there for change. Nice, subtle music, especially the second part of the piece which provides a new alley for Machinefabriek. One of the finer moments among the already fine moments.

'Koploop' is probably Machinefabriek's most unusual release to date, and together with cello maestro Greg Haines and classically trained violinist Anne Bakker, Zuydervelt has created another truly breathtaking and stunningly original study for 3" cd. It begins simply enough, with Zuydervelt taking samples received from the two musicians and layering them into a lo-fidelity soup of slowly growing sound. The dense fog of harmonic pulses slowly grows and brings to mind the best of Windy and Carl or Stars of the Lid. So far so easy to handle, but when the swelling of orchestral grandiosity dies down, the real meat of the track kicks in and we're left with a startling session handled by a true master. Where the first part resembles Zuydervelt's sublime 'Cello Recycling', the second, where Anne Bakker's virtuoso cello work kicks in, is where you take note, sit up and almost forget you're listening to a Machinefabriek record. Utterly beautiful and sounding something like a cross between an Indian raga manipulated by the BBC Radiophonic workshop, 'Koploop' shakes you about and forces you to absorb the true scope of Machinefabriek's compositional abilities - with admirable restraint and an almost peerless ear for what works. When he leaves Bakker's violin to solo, or when he offsets it with grumbling electrical bass, it always works and is never less than devastating. Another key part of the Machinefabriek catalogue and one of his finest works to date. Utterly essential.

Another brief but fantastic little self released 3" cd-r from the ever prolific Machinefabriek, aka Rutger Zuydervelt. We won't go into too much detail, as obviously fans already know they need this, and folks new to the gorgeous soft sounds of Machinefabriek could do worse than starting with this relatively cheap introduction. And as always, this is super limited, we only got a handful, and that might be all we can get.

Once again utilizing a strange arsenal of sound making devices: memo recorders, mixing deck, effects pedals, guitar, banjo, organ, laptop as well as violin and cello (provided by guest musicians), Zuydervelt weaves a breathtaking world of tranquil ambience, all summery shimmer, warm summery warble, soft languorous drones that flow and pulse like the tides. Near the end it opens up and becomes some impossibly expansive soundworld, almost choral sounding, like some homespun piece by Arvo Part, the strings emerging near the end to flutter and flit, like butterflies after a rain storm. So lovely.

Packaged in a mini 3" sleeve, strikingly designed, also includes an URL where you can download an alternate version of Koploop. 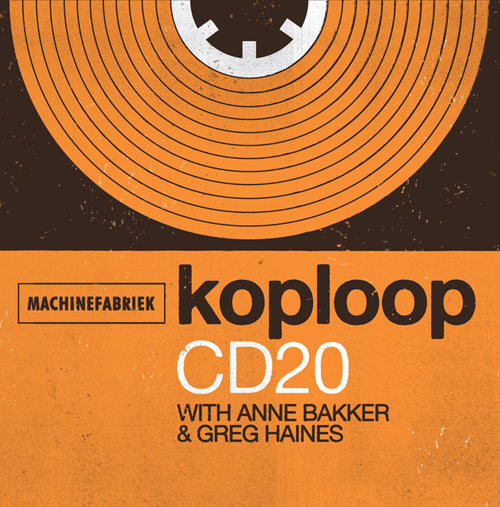