Recorded March 2009 at Extrapool studios (Nijmegen, NL) for the BromBron series.The fantastic sleeve design is by Gerco Hiddink (who also designed this site).

The Brombron project itself is work a true work of art and a good reason to the fact that the Netherlands is one of the world's leading countries in field of sound art. The conceptual idea behind Brombron was originally established as a co-production betweenblegendary Dutch label Staalplaat and the venue for experimental music,bExtrapool. Two or more musicians become artists in the residence of Extrapool. Equipped with the recording studio of Extrapool, the artistsbcan work on a collaborative project that will be released in thebBrombron-series. Fourteen excellent releases from year 2000 forward isbthe result of the Brombron project, this present album being the fifteenth release. Behind the album titled "Pulses and places", you find the two composers Andreas Belfi and Rutger Zuyderfelt alias Machinefabriek. Andrea Belfi is an electro-acoustic musician from Italy who has been involved in quite a number of sound art projects for the last decade. Rutger Zuydervelt started his Machinefabriek project five years ago, and has since then become a prolific artist of the Dutch sound art scene. To accomplish this new chapter of the Brombron series, the two artists utilise drums, small percussions, guitar and organ. The result is a real beauty. Drifting somewhere between gentle drone-based ambient and modern psychedelia/postrock, the four pieces of "Pulses and places" consists of waving organ sounds, chilling guitar drones with downbeat hand percussions. The expression of the overall album sounds like a mixture between early Pink Floyd as they sounded in their most trippy psychedelic moments and 80's rock/pop-giants Talk Talk in their more experimental postrock-based period around the "Spirit of Eden"-album (1990). As is the usual case with releases in the Brombron-series, "Pulses and places" are neatly packed in a tasteful card-slip-sleeve. Highly recommended! 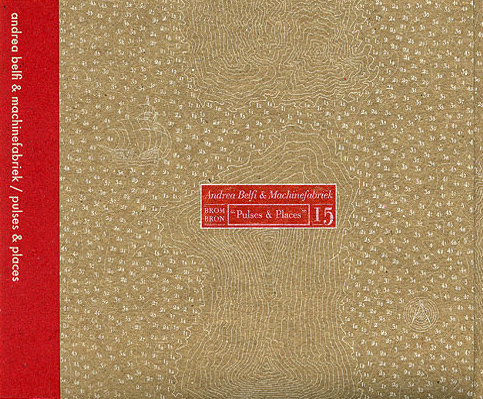