Stream or download the album at
Bandcamp (pay what you want)

The MIR is a domed, solar powered mobile stage. On May 30th it was part of the recurring art festival Code Rood in Arnhem, The Netherlands. During that day, I gave three performance, whith the small audience sitting on chairs spread across the MIR's squeaky wooden floor. The audio presented here are a mix of recordings made in the room and directly from my mixer.

We Need No Swords

MIR packages up three solo performances in a domed, solar-powered stage of the same name, recorded during a festival in Arnhem, Belgium in May of last year, with a soundcheck and minute of additional stuff thrown in for good measure. Released as a pay-what-you-like download, it’s meditative and well worth checking out, combining extremely minimal electroacoustic growls with thicker slices of ambient melody. Performance 1 is somewhat careful at first, with the scuffs and grit of Zuydervelt’s electroacoustic kit, shuffles and scrapes of the small audience (seated on metal chairs around the small domed structure) adding a slightly random air to his precise investigations. There’s a lovely swell of synthy vocalese wafting in at around nine minutes to complement some textural motor-on-metal whines. Performance 2 is at first colder fish, with stick-along-the-railings clangs offering a discordant beginning, before a drum kick that’s more like a rubber flipper slaps us round the chops and distant synths brings things back to room temperature, lapping round our sore brains like a liquid rug. Finally, Performance 3 is digs deep into the dronespace, excising all gravity from proceedings with an airless, weightless moment of being, its slow amniotic undulations the only indication that we might be drifting in the ocean’s depths rather than stranded in the cold, dark void. 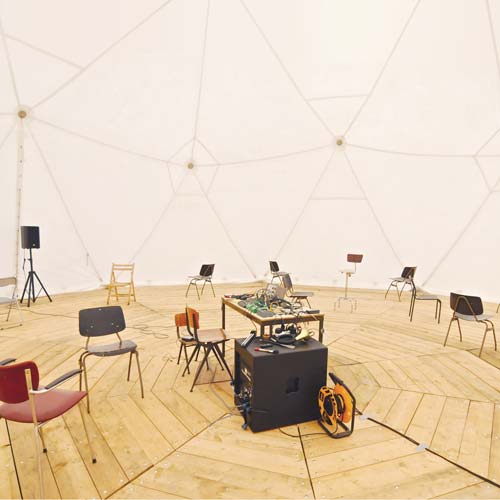