Side A. Aether, Rotterdam
Side B. Ringoya, Tokyo

This record was supposed to be a documentation of Rutger's performances in Tokyo, November 2010. But after drawing a 'Bad Fortune' card at a Buddhist temple, fate, or the gods, decided otherwise. Broken equipment, a power cut, rubbish sound systems and a malfunctioning recorder ruined this plan. Luckily, however, one of the performances was captured on film. The fractured lo-fi sound of that recording has been used for the ten minute edit 'Ringoya, Tokyo'.

So in the end, not all was lost, and the other live edit, recorded in Rotterdam, seemed to fit well in this company. The two pieces included on this record demonstrate Machinefabriek's distinguished emphasis on embracing the concept of minimalism. A triumphant 10". 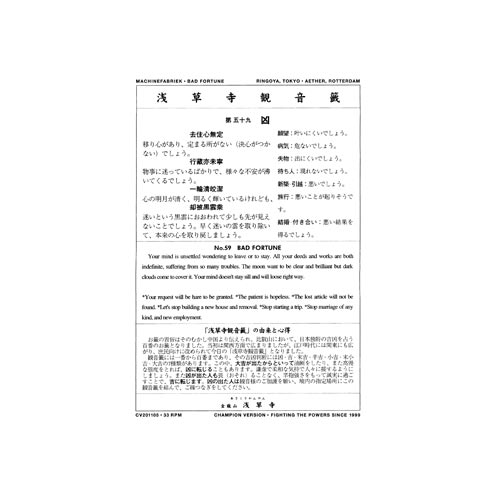