At first sight, Instuif appears to be a static video piece with equally static music. But the beauty lies within the details of this hypnotic 20 minutes. The visuals as well as the music very slowly evolve. Particles float across the screen as if they're dancing. Hypnotic, like watching an aquarium, a campfire, or waves crashing onto shore. It might make you forget track of time.

The piece was originally made for an installation, with the video and audio in a continuous loop, projected on a big screen, in a dark room. The version presented on this dvd is an attempt to translate this immersive experience to a home environment.

The dvd-r is limited to 100 copies, comes in a neat A5 paper tryptich and includes liner notes by high-energy physicist Dr. Uwe Flagmeyer.

Its not difficult to see why Rutger Zuydervelt is an excellent partner to work with. Besides being just a likeable person that is, he is also someone to work quick and deliver fine results. Following a long string of musicians he worked with, he also has interest in film. On various occasions he did work at the Rotterdam Film festival. Here he presents a new work which he made with Sabine BÃ¼rger. Its going to be part of a larger project, which will also include Steve Roden. 'Instuif' last about twenty minutes, but is best played on repeat for a long time, just as was intended by the creators, on a large screen. Not just because its so good, but because its so minimal. The image seems like water flowing from various directions, superimposed on eachother. Maybe sparks from a fire turned green on the screen. Snowflakes (and just as I thought winter was over) perhaps. The music sounds very stationary too. Two or three loops derived from the guitar. That's it. Its not something to watch very carefully, but more something to create an environment with. Perhaps the smaller screen of your TV, with sound hooked up to your home installation, is maybe a surrogate version of the real thing, but darken your room and you'll have a great moody setting. Excellent work.

Originally made for an installation, this collaboration between Rutger Zuydervelt and German visual artist Sabine Buerger now arrives on a finely presented and highly limited run of just 100 DVD-Rs. The visual component appears to feature the motion of snowfall, although really the complex, multilayered swirl could be depicting any sort of chaotic particle motion. Accordingly, Machinefabriek's soundtrack takes on a similarly minimal character, glitching and flickering through a continuous thread of granular drone over the course of the twenty-minute duration. This transpires to be one of the very best pieces of Machinefabriek music of recent times, and there's a real joy in listening to the incremental evolutionary progress of the piece as it swells, modulates and sparkles. It's great to hear Zuydervelt concentrating on digital sounds, (seemingly) eschewing acoustic or 'real' instrumental timbres on this occasion. What makes this piece so satisfying is that audio and video are in pretty impeccable harmony, with both media alluding to something that's ostensibly static yet is in fact subject to evolution and fluctuation on a minuscule level. The snow footage in is riddled with transfixing levels of chaotic detail, full of captivating changes in direction and intensity, yet Zuydervelt proves himself to be up to the task of matching the film's beauty. Highly recommended. 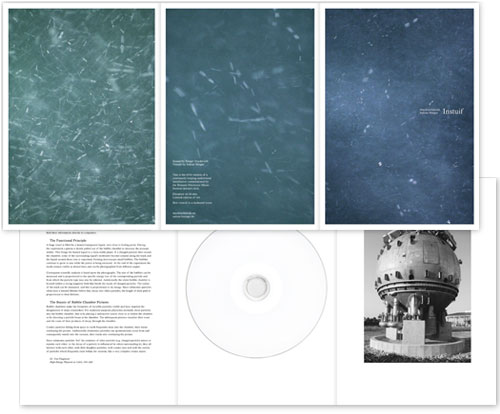