TAPE SOLD OUT
But available as download, right here

Over that past years, Steven Hess has recorded piles of cassettes on an old four-track and classroom desktop tape players, going through a chain of pedals and loopers and then back into the cassette recorders again. Besides his usual drum kit and cymbals, the sound sources include guitar, bass, AM/FM radio chatter and wood floors. After sifting through the big archive of recordings made over the years, he sent the best material to his collaborator. Rutger Zuydervelt further processed these recordings, keeping the mysterious murkiness intact, but subtly adding extra sounds, creating a complex palette of textures, and working on an overall structure. Despite their dark nature, there’s openness to interpretation and an appealing seduction. The tracks on Re:collecting are different ‘states’ or ‘environments’, converted in fascinating ambient/drone and minimalistic songs.

Using ‘mysterious’ and ‘alien’ when describing music is a pretty sketchy idea. In fact both words are practically the absence of any idea at all! Conversely, both words very thoroughly apply to the music of Steven Hess (percussionist with Locrian, Anjoy, Pan•American, and loads more) and Rutger Zuydervelt (aka Machinefabriek). This postal collaboration sees Zuydervelt reconfiguring base materials culled from Hess’ archive of murky home recordings of guitar, drum, radio, cymbal, and wooden floorboard noises filtered through a range of pedals and an old four-track. Zuydervelt definitely seems to have done an ace job of heightening the inherent dark drama of Hess’ arrestingly weird sounds. The question as to precisely which noises came from whom remains thoroughly unanswered, though fingerprints from both party remain, be they Hess’ lethargically scattered stickwork or Zuydervelt’s harshly mistreated samples. The ways in which Zuydervelt submerges Hess’ playing takes on the feel of a sonic remnant from an entirely other universe, protruding through the fabric of space into an AM radio (particularly on the title track).

Although prompted by a dislocation in recent years with the compact disc format – a de facto pull of vinyl fetishisation merging into tape nerdery – the humble tape before decorative finery is still an artifact to behold. Have a look at the reels, and it’s like bark of a tree, a metaphor and symbol of a tale twined up like a ball of wool. On this ‘Re: Collecting’ edition in gold (110 copies) by R. Zuyderveldt (Machinefabriek), members of the Locrian (also a type of rarely used playing mode) crew, and Hess, arrives four tracks of enwombingly warm sonics that feel as human and natural as the placement of a branch.

Having drone diametrics in common with heavy minimalists like Steve Roach and Richard Chartier, the release is a very pleasant swoop through the feelings of abstraction (see the intermission voices that cloud the narrative early in), and abrasion (the mixing of organic hum with the synthetic). In typical Machinefabriek fashion, post-rock arcs and aeolian mode leanings are a cornerstone, dredging up debris of fertile moments of the past and respinning them into fireworks of fresh life. A conversion that is as complex as this release is unique. All the more, it really works to bring substance.

Second track, “Re: Collecting” bears a lovely refrain after the nattering AM/FM radio reels of track one. It sounds as if from a violin, or some kind of string instrument. The atmospheres slipstream like wild fires on a hot tin roof. Constant, chitter-chatter pitter-patter radio re-enters with a echo of Glacial Movements recording catalog. Music equally arctic and ultramundane, transcendentally introspective and refractively assuaging all at the same time. In other words, chilling, bold, calming and synaptically soothing.

The length of the album sits comfortably on tape, at about 44 minutes. By the time “Evenfall” has arrived – piece three – the listener can be found in a state of protoconversative slumber with the previous baby voice samples, very reminiscent, as on track one, “Auroral”, of Sawako – Hum LP. What Machinefabriek may have in common with Chartier, female droner Sawako and Roach may be an interrogation of plunderphonics, the term Mark Fisher of Wire magazine uses to resemble aspects of part environmental tuning, part radio waves on the hauntology spectrum a la Leyland James Kirby. But I would like to think, in the typical criti-contrariwse idiom, that the best types of music cannot be compared. Indeed, “Re: Collecting” cannot be skewered onto anyone’s twine reel, it cannot be remixed, it is unique as such, and it remains, all the while, one of the rarely touched gems of the outer reaches. 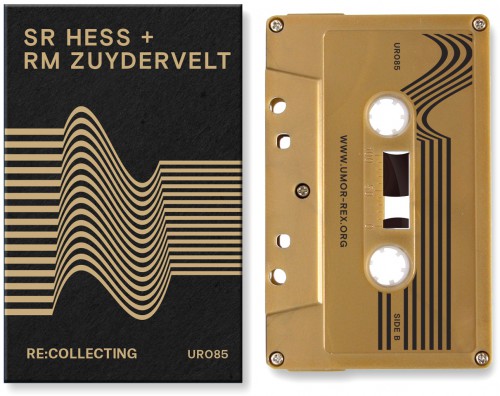