Re-issue of a long out of print cd-r album, self released in 2007. Now remastered, adding 'Feberdröm/Koortsdroom', previously released as a super limited 3-inch cdr.

Such albums I like. As a matter of fact, I knew I was gonna like it after viewing the title and ascetic cover design. My first idea was: “That could have been a Glacial Movements release.” After several sessions with “Vintermusik” I came to the conclusion that maybe a few releases of that respectable, although less active as of recent, Italian label could match the level of Dag Rosenqvist and Rutger Zuydervelt’s joint proposal.

It’s not new material, as the album was composed and self-released in 2006 (actually Rutger did it by himself). The sounds from the original “Vintermusik” are enriched with an amazing, more than 20-minute long “Feberdröm”, which comes from the same titled miniCDr originally issued by the unknown – at least for me – Odradek Records in 2007. Both the Swedish and Dutch have a decent ambient experience. Dag is more commonly known as Jasper TX. Under this name he has recorded a number of albums, though sometimes he signs his music with his own name, such as the vinyl “Fall Into Fire” released recently via n5MD. Rutger is primarily Machinefabriek, which I suppose needs no further introduction. One of his last outcomes as Machinefabriek Rutger delivered through the aforementioned Glacial Movements. And the circle is closed.

“Frost / Vries” begins with silence, out of which grows one of the most monumental drones that I’ve had the opportunity to listen to lately. Mathias Grassow himself wouldn’t be ashamed of it. The guitar/ electronic texture generated by the musicians reaches a climax at some point, so that it falls and then slowly gives way to a moment of harsh frost captured in time and space. In “Gräs Som Bryts Och Gar Av / Gras Dat Knakt En Breekt” a melancholic, drowning in dense reverb post-rock guitar part emerges from a bass darkness and sound glitches. “Blasa Rök / Rook Blazen” has a seemingly more clear structure. There’s an enchanting guitar once more, but abstract, although desperately trying to capture some kind of order; field recording forms try to divert the listener’s attention over and over again.

Dissonances, guitar feedbacks and a moment of a marvelous melody on the piano and saxophone, accompanied by the sounds of playing children. Like a post-nuclear winter and transmissions from the past drifting in the air, when one was still allowed to laugh. It’s “Ljus I November / Licht In November” where the two gentlemen ascend to the heights of emotional impact art, even if they do it in a very straight way. “Tappad Vante / Verloren Want” is the shortest, most experimental and probably the least interesting and engaging piece of the release. Such a moment of respite is certainly useful before the two closing compositions of “Vintermusik”.

The first of them, “Islossning / Ijsbreken”, is a cold, but in its own way serene composition consisting of guitar drones, male vocalizations and field recordings. A sunny, but very frosty day in Greenland, far away from civilization. I see the Inuits during their daily activities, some men preparing for a whalehunt. The snow is so white that looking at it can make you blind. While listening to “Feberdröm / Koortsdroom” I have similar images before my eyes, but without the human factor. After a few minutes you don’t even notice this brain-drilling drone anymore, as you listen to the background painted with the echoes of Geir Jenssen’s most beautiful works.

Zoharum is constantly very active, so in the flood of their publications “Vintermusik” can be missed. Such an oversight would be a real shame, because for me it’s one of the best things that this label has ever released. Winter music with many shades of white. 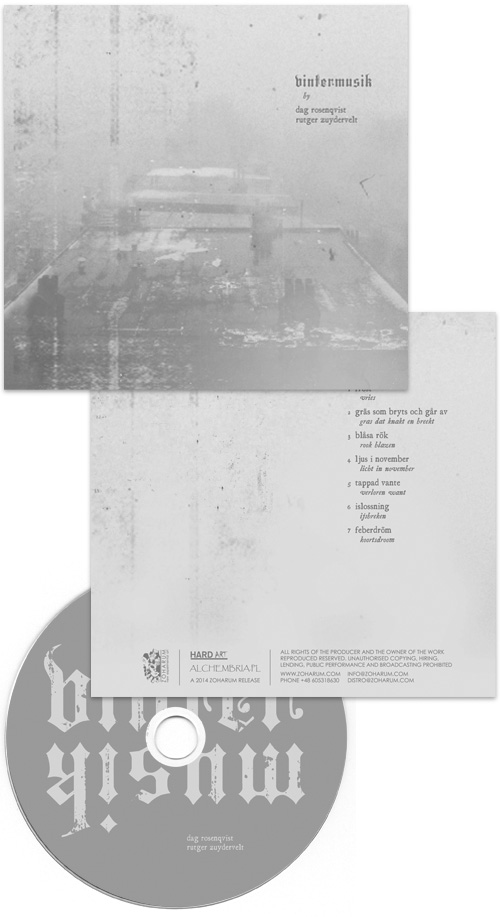