Long time Roadburners will be familiar with Dirk Serries – he has performed at the festival under various guises a number of times. Having already hosted him with Fear Falls Burning, Microphonics, Year of No Light, Yodok III and Scatterwound already, we were due to welcome him back in 2020 with Kodian Trio. Fate had other ideas… but in with a creative spirit that never stops wandering and a thirst for experimenting, we knew that Dirk would be primed and ready to throw himself head first into a commissioned project for Roadburn Redux.

Since 1984 Dirk Serries has been pushing sonic boundaries throughout a variation of styles, from the harsh industrialism of the early 80s to his current A New Wave of Jazz label under which he releases free improvised music. Well known for his take on carefully executed and exquisite ambient music, Epitaph is the banner under which he performs with an improvised approach instead. For this special Roadburn performance, he will be creating alongside Tom Malmendier on drums and Rutger Zuydervelt on electronics. Having already collaborated with both previously, but never in this exact configuration, we’re sure to be in for a treat.

Huge harmonic drones will be infused with the abstract dynamics of drums, and the piercing, subliminal electronics to create something truly experimental and improvised. Dirk describes this performance as “the dwelling place, the moment of contemplation; a space to enter and shed off burdens”. We’re ready.

The Roadburn Festival takes place annually in Tilburg, Netherlands (modulo COVID), and has been getting progressively more interesting. Its relatively recent slant toward the experimental has resulted in a number of wonderfully unusual performances, including Triptykon with the Metropole Orkest in 2019 and Jo Quail in 2022 both combining heavy metal or metal-influenced material with classical music.
The 2021 edition also featured a compelling combo, that of Dirk Serries (Vidna Obmana, Fear Falls Burning) with percussionists Tom Malmendier and Rutger Zuydervelt. As captured on this release, Serries employs drones and layered synth, harkening back to the sounds of his earlier incarnations. Malmendier and Zuydervelt keep up busy patterns of percussion – almost tribal in their power and subtlety – with more emphasis on drumming, objects, and electronics than cymbals (until the last track, where cymbal use is more prominent).

Split across three long tracks that pack a quiet intensity, this trio’s efforts provide ominous and carefully sculpted dark soundscapes. As Serries generates thick waves of sound, Malmendier and Zuydervelt alternate between pounding, skittering, and scraping. The overall impact is that of biomechanical structures falling apart and reassembling themselves in accordance with algorithmic cognition.

Regardless of whether you have heard the many works of these three gentlemen, Epitaph serves as a superbly crafted introduction, as well as an impressive representation of dark ambient drones with percussive elements. Very well done. 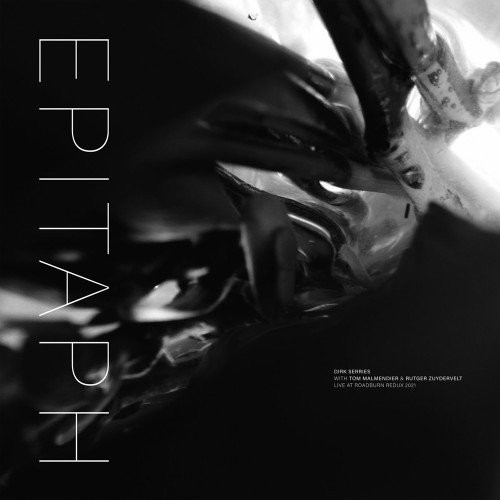