This beautiful collaboration features two of the most prolific talents from the current experimental scene, both with reputations of leviathan proportions. For this release, Machinefabriek, based in Rotterdam, The Netherlands, and Peter Broderick, based in Berlin, Germany (although constantly on the road) set out to push each others limits, and to explore new areas within their own creativity. The resulting album is a delicately crafted one, with Machinefabriek and Broderick virtuosically combining instrumental compositions, drone, and heartfelt soundscapes with song structures and vocals. Or as Peter Broderick himself put it: "We tried a lot of different things on this album, pushing ourselves to explore new areas... And for me the result is the collection of music I feel most proud of so far."

The problem with talking about music as delicately beautiful as Peter Broderick & Machinefabriek's 'Blank Grey Canvas Sk'y is that you're almost afraid that you'll break it by doing so. The duo's first collaboration deserves hushed tones, whispers and perhaps even a bit of reverent silence. Only rarely do they build their compositions into swirling masses of sound. And, when they do, it's almost unbearably emotional, again resisting the tyranny of language.

Machinefabriek is used to collaborations, working with the fringe folkies and ambient experimenters such as Aaron Martin and Jasper TX among many others. And his droning backdrops often stay deep behind Broderick's more easily discernible piano and strings. But both take different roles when it suits: Machinefabriek takes center stage on mid-album highlight 'Kites', building an assured, flowing organ drone that strings dive underneath.

A plaintive piano, however, is perhaps the most important melodic device employed throughout. Broderick presumably is behind the ivory for many of the tracks, with guests arriving for 'Planes' and 'Homecoming', but it hardly matters who is playing: The effect is the same in each instance. Each time someone hits the key hard enough to make a sound, it's as though a) they've thought about it for at least a few minutes beforehand and b) they may never do it again...until they doThe spell is broken only twice, really.

'Rain' features a lilting guitar and Broderick singing alongside Susana Lundgren, while 'Blank Grey' reaches a frightening climax of torn-up radio snippets and a fervent and minimal piano before fading off into considered silence once again. Despite the initial shock of intelligible vocals and the almost frighteningly urgent climax of the two tracks, they're both consistent with the overall tenor of the album, and don't surprise as much as they inspire.
Broderick, who may be more familiar to listeners due to his work on Type, Bella Union or even as a member of Efterklang's touring band, says that 'Blank Grey' "is the collection of music I feel most proud of so far." He should be. His overtly simple work under his own name is often sweet and naïve, but often feels undercooked as well. With Machinefabriek, however, he's found a collaborator able to add unexpected ballast to his sometimes weightless work.

Blank Grey Canvas Sky, a collaboration with Peter Broderick of Eftenklang released towards the end of 2009, is a case in point. With a little help from friends like Adam Selzer and Nils Frahm, the duo embarks on a weightless 42-minute-long journey beyond the restrictions of conventional genre-definitions. Glowing Piano-harmonies form the steady backbone to an otherwise perpetually transforming album encompassing tender ensemble-settings, Philip-Glass-like pulsations, quiet soundscapes, resonant organ-drones and self-forgotten acoustic Guitar pickings. Individual tracks all have their distinct personality, yet it is the way in which they build from the ashes of their predecessor and ebb away into their follow-up, the way everything is delicately and almost casually connected which makes 'Blank Grey Canvas Sky' (a reference to the lyrics of 'Rain': "the autumn time when the sky is a blank grey canvas, I don't wanna paint on it") a sweeping auditory experience and lends it both a hypnotic tension arch and a spellbinding narrative.

Developing a strong pull, the album feels like a single symphonic movement held together by themes and timbres. This notion is reinforced by the prominent position of 'Blank Grey', an almost a quarter of an hour long proposition of loose Guitar strings, radio static, metallic glitches, distant feedback and glorious one-note impulses building up to a darkly glistening climax, before lapsing into complete silence and returning as a whispering ghost at the end. Considered something of a nuisance by some commentators, the piece is in fact both a necessary counterpoint and a compositional mirror, in which the entire record is reflected in an opaque twilight, as if trying to remember itself in a confused fever-dream. It is a gateway the listener needs to pass through before being released purged and reborn in the sweetness of closer â€žHomecoming" as well as an important sign that neither artist is shying away from conflict in order to attain their goal: Telling a story which feels like it's never been told before.

I only heard music by Peter Broderick from his 'Music For Falling From Trees', a LP released by Western Vinyl and reviewed in Vital Weekly 680, but he is quite active, either as a member of Efterklang and with his own solo releases. He hails from Oregon, but lives in Berlin these days (who isn't? well, the Vital people of course). He teams up here with that other guy whose work load always seems to be piling up: Rutger Zuydervelt, also known as Machinefabriek, who pushes out lots of collaborations. Following last week's release with Tim Caitlin, its now turn for Peter Broderick. Unlike last week, when it was clear that Zuydervelt was using sound material supplied by Caitlin, there is no information here on how these things were made. Did they sit together in the studio (like Zuydervelt did with Andrea Belfi earlier this year) or an exchange of sound files, or one working on sounds of the other. I somehow put my money on the exchange of sound files, where Broderick gets to say his say?in three tracks and Zuydervelt in the other three. I can't say this is 'another' Machinefabriek collaboration, although partly it is. There is the well-known soft guitar playing and sound effects in full operative modus, but throughout I thought there was something altogether more 'musical' about this. Maybe its the use of vocals, even so sparsely as here, but also the addition of some clear piano notes (also sparsely) and likewise clear guitar parts that make this wholly more musical than some of the other collaborative efforts undertaken already. An excellent CD.

Rotterdam's Rutger Zuydervelt has previously worked with Peter Broderick on the Machinefabriek 3"CD Huis, although for this collaboration there's a more even distribution of work. Zuydervelt's heavily processed drone-weaving is countered by luscious acoustic instrumentation, but importantly, none of it feels tacked on, and these two prolific artists make a good job of integrating their respective approaches. It's actually a very natural collaboration: while Machinefabriek often converges on the classical and cinematic, Broderick's instrumental music is rendered with a discerning producer's ear. After an introductory splash of droning atmospherics on 'Departure', the follow-up track, 'Planes' takes on a more classical sound, featuring Broderick's urgent, Philip Glass-like piano riffing and a wordless, hummed vocal that gels into the swirling Zuydervelt soundscape. Possibly the finest piece on the whole set, 'Kites' operates in a similar fashion, with loose, impressionistic key-work and distant strings melting seamlessly into an electroacoustic sonic environment. It's like a hallucinated symphony orchestra drifting across airwaves before slowly disintegrating into bad reception by the piece's oddly poignant end. Marking a slight change in direction, 'Rain' features vocals (a duet between Peter and Susanna Lundgren) and acoustic guitar while contact-miced rainfall forms the basis of a backdrop. An altogether more experimental, radio-based sound collage, 'Blank Grey' is predominantly electronic and relatively severe, using acoustic instruments as a brooding, mysterious background while cut-up speech fragments and broadcast signals populate the mix. Eventually, Broderick arrives with processed piano and layered vocal loops lead the fourteen minute composition to a close. Considerably less perplexing is the lovely closer, 'Homecoming', featuring piano recorded by Nils Frahm and grainy waves of manipulated, fuzzy sound waves. 'Blank Grey Canvas Sky' is a sonically rich album that marries the talents of its two stars without there being any indication that it occupies a compromised middle ground. Gorgeous.

Both Peter Broderick and Machinefabriek have appeared on this blog before, especially the latter, so my predisposition to this collaboration was already fairly established. However, I must admit I wasn't quite ready to be as taken with this project as I am. Just before it was released I remember reading a quote from Broderick saying it was probably the release he was most proud of and that it felt like a true collaboration. Listening to it, you are able to tell where Broderick ends and Machinefabriek begins based their previous output, but the two sounds are so tightly wrapped around each other and integrated that this lines blurs sometimes, forming an entirely new artist in its wake. Opener "Departure" unfurls like an overture, with a quietly escalating bed of drone struggling to overtake the momentous piano. In many ways, I'm reminded of the Wagner overture "Thus, We Begin In The Greenish Twilight Of The Rhine," with it's similarly pensive build-up. The long 'Kites' stretches out over eight minutes with a contemplative piano melody, strings, and undulating guitar drone holding it all together. The drones have the effect of submerging the strings so they heard as if from the next room and float in an out of your field of hearing. It's easy to picture yourself watching kites weave through the wind when listening to this musical concoction. 'Rain' is striking for how different it is to the rest of the album. After the low-key guitar drone and strumming of the first half, vocals and a traditional guitar melody take center stage on this track. It jolts you a little bit, but fits in wonderfully, coming mid-way through the album like this. Easily one of the best collaborative albums to come along in recent years, this is a fantastic addition to both Peter Broderick and Machinefabriek's catalogs. I can only hope there will be more releases in the future.

2009 definitely has been the Year of Peter Broderick, at least in my book, with THREE remarkable records. Blank Grey Canvas Sky fits in Broderick's "ambiant experimental music" body of work (he also does alt-folk and film music). This collaboration with Machinefabriek is a little gem, full of zen textures, antiquated melodies, and audio research that grates yet calms. Broderick's fans will be treated to a little more digital pollution than what they're used to, but they won't feel lost. The soundworlds of these two artists intersect in very nice ways. 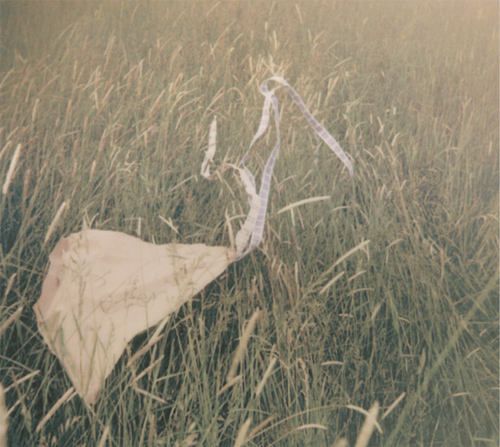 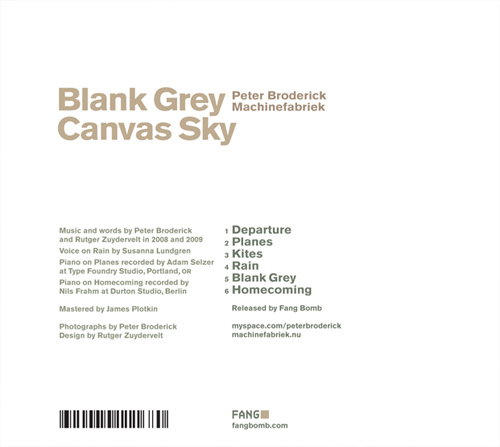 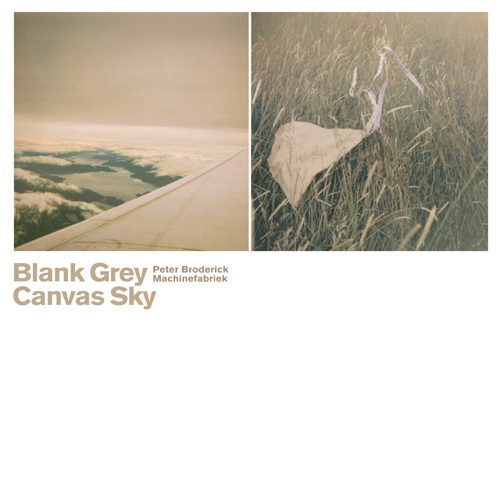 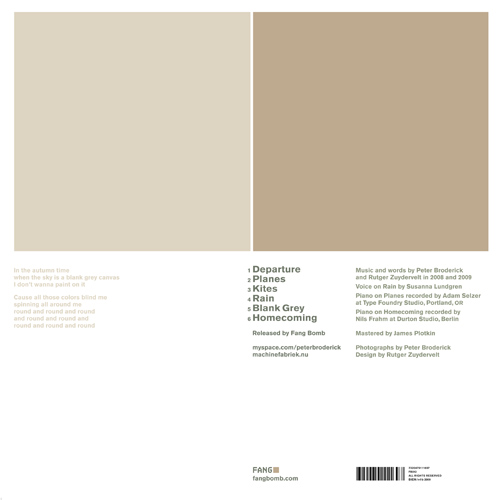