A compilation of tracks for various projects and remixes (from Tom Carter and Mist).

Machinefabriek is often compared to Fennesz. In terms of method and process, it's not a totally misguided comparison, but the correspondence is only valid in passing moments. Machinefabriek, aka Dutchman Rutger Zuydervelt, has a very different range, with less density of sound, or rather, a much more variable density of sound, that unfolds narratively. Like the best improv artists, he uses the tension between silence and sound, texture and timbre masterfully. (And, mercifully, without the dogmatism that shadows the improv scene)
Zuydervelt has released fifteen or so limited 3" mini CDs over the last few years, each a twenty-minute installment of music that demonstrates a singularly eclectic approach. Zuydervel managed to stay well under the radar until his debut album Marijn (mastered by Andreas Tilliander) was released earlier this year by Manchester experimental label Lampse. The album combined degraded electronics, piano and elements of musique concrete into a sensual and menacing whole.

This new album Bijeen ('Together') is on Swedish label Kning Disks, a rather obscure imprint that also has Wolf Eyes and Jazkamer's Lasse Marhaug on its roster. The album is a collection of remixes and original compositions (noted in the subtitle 'Gathered Eccentrics' 2005-2007) that Zuydervelt has put together with obvious care.

While Marijn is perhaps a more accessible album (many comparisons with Basinski etc), Bijeen has a full breadth of emotion despite being more of a challenge in some ways. 'The Borghesia Remix', for example, could be seen as a brutal opener. Beginning with a silence that makes you start checking the settings on your amp, it swells into a wall of noise that builds into a threat of collapse before disappearing suddenly, dropping back into silence. But it clears the decks and functions as an ear-cleaning for the subtle, deep textures that follow in 'Piano_wav'.

A highlight is 'Weightless Remix', where the acoustic melodies slowly disintegrate into unstructured static. Across the album, the cycles are perfectly paced and surprisingly dynamic â€“ it's the perfect antidote to the relentless beats that implanted themselves in your brain the night before.
Bijeen may not be the easiest or most logical point of entry into the Machinefabriek world, but it's an engaging excursion across the beatless borders into noise, drone, static and circuit-breaking electronics.

It seems you cannot get through a week without a new Machinefabriek release as Arnhem-based Rutger Zunderveldt sets about redefining the meaning of prolific. Only his fellow countryman, Ruud Van Nistelrooy, comes close and his expertise is in football not music. While his 2007 back catalogue is well into double figures, "Bijeen..." collects those compositions from the last couple of years that even the most attentive fan might have missed.

Machinefabriek deserts his favoured guitar experimentation for a processed piano piece, on the predictably titled 'Piano.wav'. For this track, Zuyderveldt stretches, chops, glitches and filters a vaguely familiar piano sample immersing it in his world of static and hiss. 'Havelaar', meanwhile, rumbles with his patented brand of tension, like the collapse of some huge, nuclear plant in the former Soviet bloc. This piece soon ascends from an eerie silence erupting into a quite frightening section of jarring, abrasive noise.

Tension is key to Zuyderveldt's music, as the outstanding 'Borghesia Remix' will attest. It may start rather beautifully with what sounds like a digitalized string section, but an ominous hum and glitch electronic rustles lie just under the surface, creating feelings of apprehension and unease. Within such a setting, it is not long before we are catapulted into a segment that can only be described as digital terror. The huge vacuums of abused distorted guitar and degraded electronics are disquietly delightful.

'Weightless Remix', though, redresses the balance, adding some orchestral sounds giving off an optimistic and hopeful aura, while providing respite amidst the austerity of other movements on 'Bijeen...'

We should know by now an odds 'n sods collection of material from Machinefabriek isn't going to be exactly what we expect. Zunderveldt pours every ounce of passion into all of his compositions. If we are talking value for money few do it better than this Dutch destroyer. Kning Disk has collected over an hours worth of rare music together here. Each piece, from the monolithic 'Licht' to the exotic 'Verdrinkwater' is doused in the tension that is such a hallmark of Machinefabriek's music. 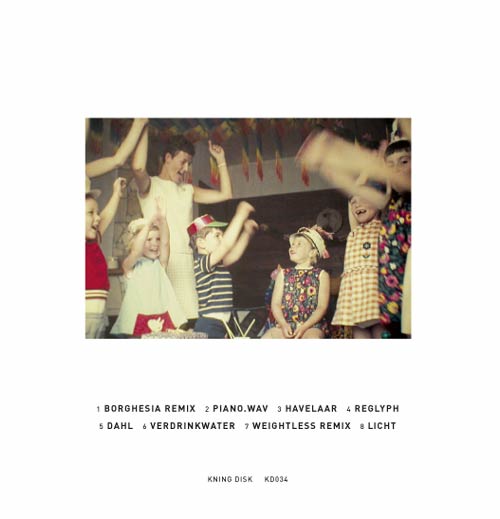 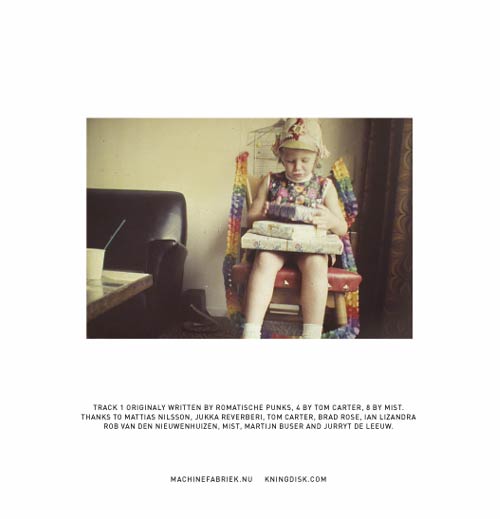