'Stillness' is a project by Esther Kokmeijer and Rutger Zuydervelt. A series of slow moving cinematic landscapes, filmed in Antarctica and Greenland.

The films are released in quicktime format on a numbered usb-stick with an added informative PDF document and an A6 full colour printed postcard. Limited edition of 100 copies.

As the trailer demonstrates, the videos are not dark - as some would probably expect for 'arctic ambient videos'. On the contrary: they are bright, sometimes even sunny, highly detailed (and extremely beautiful) views of drifting ice and arctic water. You can almost see how cold this water must be!

The accompanying score is Machinefabriek at his very best: his tracks support the videos just like a good soundtrack should. There are hints of rhythms, short bass punches and sustained cello chords keeping the drone sounds interesting and dynamic, also when listening without watching the videos. In the closing track, Machinefabriek gets even more melodic than he usually does, introducing a minimalist post-classical cello theme.

The movie and the music are a perfect match. And apart from that, this project demonstrates this tiny USB-clip is the perfect new medium for releasing multimedia projects like this: it virtually eliminates the dreaded (international) shipping costs!

This stunning project reinforces the adage that good things come in small packages. Postcard aside, the USB stick is only the size of a tie clip, but it holds some of the loveliest images you’ll ever see, and with the right cords, can be played on a large screen TV. This is the best way to watch Stillness, as these images are vast, nearly beyond comprehension, the result of multiple trips to the Arctic and Antarctic. Esther Kokmeijer has done a magnificent job capturing the grandeur of the ocean, the icebergs, the frozen landscape.  Best of all are the indefinable blues: hues best reflected in light and shadow.

In terms of these images and the accompanying music, stillness does not mean stuck or stopped. Everything is in motion: the water, the birds, even the glaciers. Glacial movement is still movement, albeit very slow. In this instance, stillness is a frame of mind: be still, my soul. To watch is to slow one’s pace, to surrender to the natural flow of time. One does think of global warming, but these images are simply meant to reflect beauty; one’s reaction is not determined by the source material, even if the last minute of “Stillness #4″ sounds like a melt.

Rutger Zuydervelt‘s music is a perfect match to the material. As an avid fan of nature films in general, specifically short form works, my personal reaction upon hearing the score was “thank God”. Too many nature scores seem mired in a trench between Enya and Sigur Rós. Zuydervelt (better known to many as Machinefabriek) provides an effective antidote with an intelligent, slow-moving score that sounds like mystery and wonder without ever being saccharine or maudlin. ”Stillness #1″ opens with a static crackle that imitates the creaking of a hull. Dark strings reflect the passage through even darker waters, while drums intimate the passage to Skull Island, albeit without the giant monkey. Scenes change on the beat; the score and images mirror each other. This may be music for glaciers, but it’s not glacial; it’s carefully placed.

As one watches a ship navigate through snowy obstacles, one thinks of the Russian ship and Chinese icebreaker that were caught in the Antarctic ice earlier this year; no such fate was met by Kokmeijer’s crew, but one can see how it might have happened. As beautiful as these territories may be, they are still wild and untamed.  In any form, water is lovely, yet also dangerous. The power and the majesty of the images and notes does as much justice to the subject matter as one can imagine from a distance. Thanks to Kokmeijer and Zuydervelt, we can experience grandeur from the safety of our homes; but viewing makes one want to get closer. 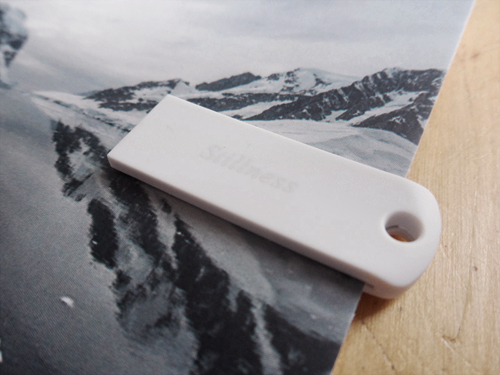 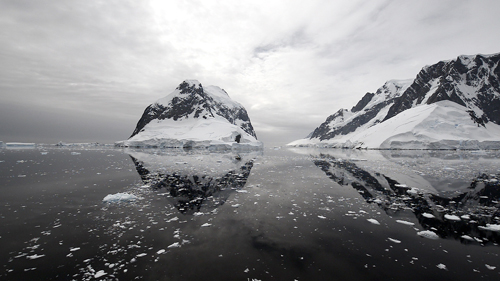 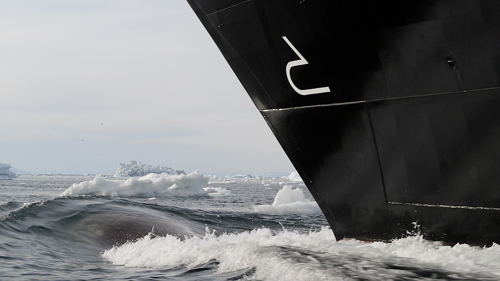 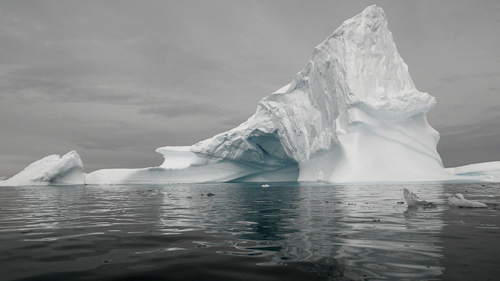