1. Orca Towards Ground
2. Archaeologists and Double Bass
3. For Ailing Health
4. Architecture and Quantum Physics
5. The Desolate Delay
6. The Harmed Harp

Par Avion is an album that belongs in the category of "music from another room". Music of this nature, built on subtlety, has the effect that what your hearing is actually coming from another room, as it exhibits qualities of vast expanse and separateness. After putting on the record and allowing it to fill the space with its presence, the minutia becomes apparent after closer listens but the overall effect is distant and far away. It seeps into corners, into the cracks of the wall, hides underneath floorboards, and comes to rest in thin air; the dust finds company. In this manner, Par Avion makes its fragile nature known through repeated listens, in after thoughts, as it will haunt the listener for some time after hearing it. While never in the foreground, it begs the listener to move inward, through the cracks, the floorboard, the thin air.

Ithaca Trio work in a similar vein to Zelienople, except that in addition to the three members, there is a fourth member whose presence is felt throughout: silence. It seems that as most bands will begin with noise, and use silence when at rest, Ithaca Trio begins with silence, harnesses its power, and works to fill in places with sound where it is absolutely necessary. I am reminded of the note accompanying Sylvain Chauveau's 10" release on Type Records, S, which states "For a more realistic listening, please play this recording at low volume." In a similar manner, Ithaca Trio craft their four pieces around this idea, and, played a low level, the music speaks volumes. On "Orca Towards Ground", the pitter-patter of drums intersects assorted screeches and organic groans. The freeform approach reaches a pinnacle with "For Ailing Health", marked by a slow rumble that defines the somber title.

Machinefabriek submits two pieces to close out the album, both with clever, alliterate titles "The Desolate Delay" and "The Harmed Harp". The barely there and brilliant ominous drone that runs throughout the former, finds a fulcrum in the heavy-handed harangue of unidentified, unilateral sounds sequenced in a stifling space. The loneliness felt from the delay is all-encompassing and the fade out moves the listener effortlessly into "The Harmed Harp." More obtrusive than its predecessor, the harp is tortured by some kind of device that gives the piece a more forceful and unsettling presence before it seems to become accustomed to the torture and begins to emit more comfortable sounds. The build-up of tension quenches the listener's appetite as they are drawn from the "other" room towards the speaker where the volume must be turned up. 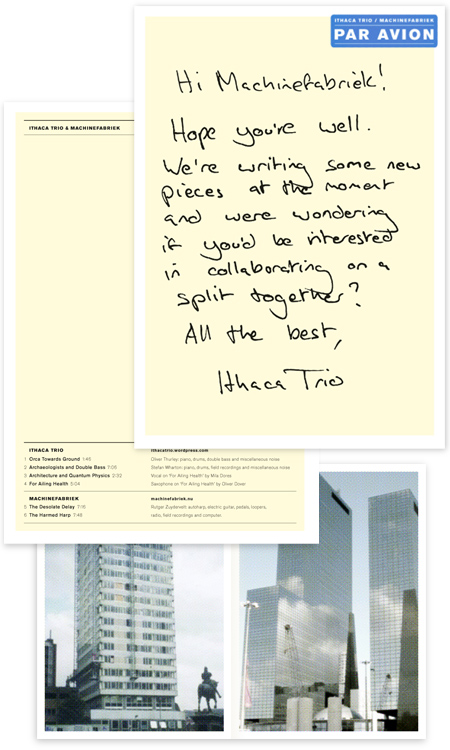